Testing a Network Communication PCBA from Prototype to Manufacturing

The network communication (netcomm) printed circuit board assembly is one the largest boards in terms of size, number of nodes/nets and components. It also has the most advanced technology in terms of speed and complexity. The quality of a product and its success depends on deploying an effective manufacturing test strategy to catch structural defects and prevent bad boards from flowing down to the functional station, box build or, at worst, into customers’ hands.

The manufacturing process of netcomm PCBAs faces many test challenges, mainly due to the loss of test access (FIGURE 1) with the prevalence of the following technologies: 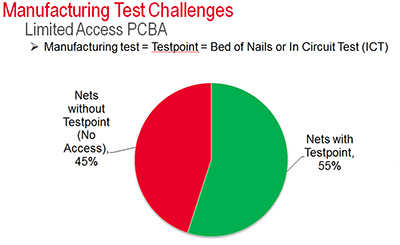 Boundary scan is cost-effective because it can be integrated into every stage of the PCBA manufacturing testing to recover coverage for those nodes/nets that have no test access, while at the same time reducing manufacturing test cost. 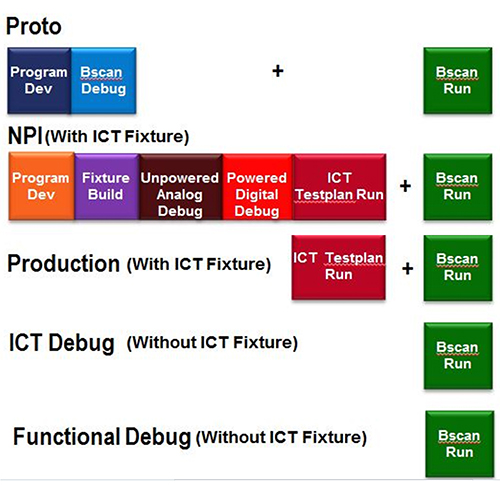 Now let’s look at how a typical netcomm board is built, as it will give us a good idea on the test requirements and potential solutions:

1. Prototype build. This is the initial step where the design center or R&D team builds the board to verify software and hardware design.

2. New product introduction. This step involves a lot of work toward testing boards and verifying their manufacturability. Boards that are built will then be shipped to various sites of the company, or to customer sites and government bodies for certification and testing.

Typical netcomm nodes/nets can range from 6,000 to more than 10,000 per board. A PCBA designed for BST will be able to test at least 40% of these nodes, thus reducing ICT fixture and system requirements.

An obvious benefit is the lower cost of ICT fixtures. Nodes/nets tested identified and verified during prototyping by boundary scan can be removed from the ICT fixture. This will translate to significant cost-reduction for fabrication of the ICT fixture.

TABLE 1 shows an example of ICT cost-reduction. Note that in this case study, we assume each ICT test access removal can be translated to a $3 cost-reduction. Also note that costs are estimated and may vary by vendor and geography. In such a scenario, the loading on the ICT system resources will be reduced significantly, hence allowing manufacturers to use their existing production systems instead of buying a larger node count ICT system that will increase their manufacturing cost.

3. Production. The final step of the cycle is just before product starts shipping to customers.  During the production stage, the BST developed at the early prototype stage can be integrated into the production stage for ICT, and can also be used as a debug station at both ICT and functional test.

Implementing a BST strategy for a netcomm PCBA during the prototype stage will not only ensure higher test coverage during prototyping, but also ensure NPI and production testing can more seamlessly accommodate the boundary scan test as production ramps up. A well-thought-out implementation strategy will thus not only ensure higher product quality, but also greatly reduce the cost of test for each netcomm PCBA produced.