Memory capacities are one of the important product specifications consumers review before buying a product. An increasing number of memory devices are being packed into electronics products, and a single malfunction could cause gross failure across the devices.

This month, we focus on how on-board flash memories are being tested and programmed at different stages of product development and manufacturing. (The term “on-board” refers to flash memory soldered into the PCB.) 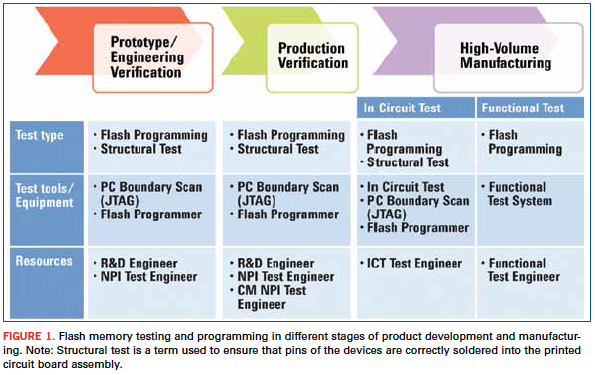 The PC boundary scan tool offers some advantages worth considering:

During product verification, depending on the test strategy used, the PCB with on-board flash memory can be tested and programmed using in-circuit testers or a PC boundary scan tool. The latter can also be integrated directly into the ICT for boundary scan testing and flash memory device programming, and the same test developed for the prototype can be reused during engineering verification.

At the high-volume manufacturing stage, the two important things to look for concerning on-board flash memories are:

The flash test executed at this stage is done using a simple walking one “1” or walking “0” test to toggle the address. The data bus is verified by writing a complementary set of data to ensure all pins are toggles. The control pins such as write enable and output enable of the flash memory are also checked to ensure the pins are correctly soldered on the PCB.

This test can be executed either by using a PC boundary scan tool or an ICT during production testing.

It is not advisable to program large amounts of static data in the flash memory using boundary scan silicon nail or via direct programming using the ICT bed-of-nails, as the test time can be very long, and this might affect the production beat rate.
Static data can still be programmed into the flash, however, if they are only a few megabytes, as in those found in firmware needed to enable PCB boot up at the functional test stage, or when dynamic data programming is needed. These examples can be found in the creation of mac addresses, board serial numbers, time stamps, testing history and other variable data.

Programming flow for dynamic or static data during production (Figure 2): 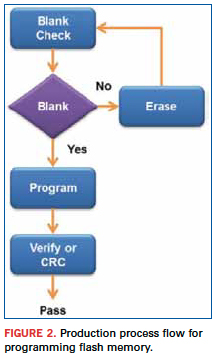 It is good to keep this flash programming flow in mind. Flash memory testing and programming are very important steps of the product development and manufacturing stages. By preselecting the right tools, the entire manufacturing process, from R&D and NPI to that of production verification, will benefit.