Go with the Flow

Paste viscosity can inform why solder performs one way in high-volume production and another under high-mix conditions.

Viscosity and thixotropy are not words heard in casual conversation, yet they are very common material characteristics we encounter in our everyday lives.

Viscosity is defined as a fluid’s resistance to flow, but is more commonly referred to as a fluid’s “thickness” (flowing slowly like motor oil) or “thinness” (flowing easily, like water). Thixotropy, on the other hand, is a unique property in which viscosity changes with the forces being applied to it in a nonlinear fashion. Thixotropy is a critical characteristic for paint, toothpaste, nail polish and, if you're reading Circuits Assembly, solder paste.

Thixotropic materials are also referred to as non-Newtonian fluids, due to their nonlinear response to applied forces. (Newtonian fluids have a constant or linear response to applied force, with air and water as good examples.) The effect of shearing forces on thixotropic materials can produce different outcomes, depending on the forces’ strength, speed and duration, which are typically expressed as shear force, shear rate and time. A common example of how materials react to shear thinning includes wall paint; paint shear thins during the brush or roller stroke for ease of flow and to fill imperfections, but quickly thickens to prevent runs and drips.

Solder paste is much like paint in this way, as the paste rolls in front of the squeegee blade, the rolling introduces shearing forces that reduce viscosity to permit the paste to flow into and fill the stencil apertures. Once the squeegee passes, the energy dissipates and the solder paste returns to its original state. In this state it is thick enough to maintain the shape of the aperture after the stencil is lifted and the printing processes are completed. When components are placed on the paste, it deforms under the placement pressure to accept and retain the components, but again holds that shape until reflow.

FIGURE 1 illustrates this response of two different solder pastes under shear forces. Paste A had a higher initial viscosity and thins down more readily in response to shear. Paste B starts with a lower initial viscosity and thins less as the shearing forces increase. Because Paste B’s reaction to changes in shear is not as pronounced as Paste A’s, it had a wider process window and performs more consistently at different squeegee speeds and pressures than Paste A. 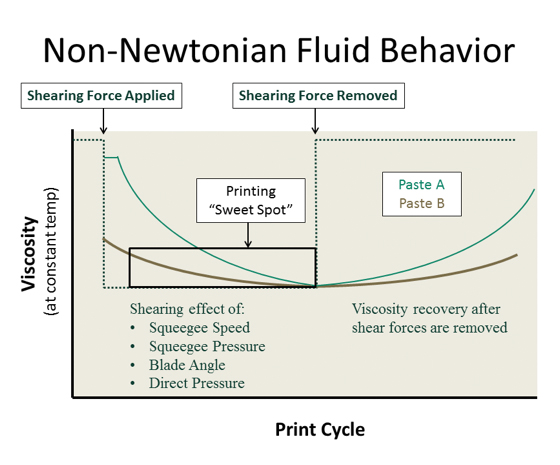 High-volume, high-throughput production lines require high print speeds and, as a result, higher squeegee pressure to achieve a “clean” print. The additional energy input will shear thin the paste chemistry more readily than would a low-speed, low-pressure print condition, and yet the paste is expected to provide the same level of performance in both scenarios. Therefore, a thick solder paste that responds well to high energy input may perform well in high-volume production, but performance can be reduced when in a low-speed, high-mix environment. 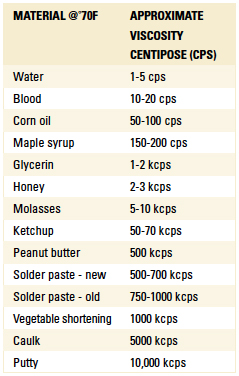 Sometimes it’s good to go with the flow (pun intended) and embrace the changes required to evolve and thrive in a rapidly developing production environment.