Silver is a known whisker promoter, but small amounts of bismuth mitigate the problem.

Alloy composition has a strong influence on tin whisker production and has proven to either mitigate or exacerbate the propensity for a solder to whisker. In our year-long study of the relationship between alloy composition on tin whisker formation, SAC 305 notoriously produced more and larger whiskers than any of the other alloys tested.

Sn0.6Ag0.6Cu3Bi, labeled “Alloy #69-2” in our test matrix, a tweak on one of the original nine alloys, produced the least and smallest whiskers. It also performed well in the other electronic solder suitability tests such as wetting, oxidation resistance, melting temperature and mechanical properties.

In this final round of tin whisker growth tests we aged the samples at 85%RH and 60°C for 5000hr, or roughly seven months. We documented whisker growth at 2500, 3000, 3700 and 5000hr. The low silver SAC alloy with bismuth didn’t grow any whiskers for the first 3000hr, and when it did produce them at 3700 and 5000hr, they were smaller and/or fewer than the other alloys. Its largest whisker, recorded after 5000hr of high heat and humidity storage, is shown in Figure1. This tallest projection, at 29µm tall, dwarfs the alloy’s typical whiskers seen surrounding it, which are usually less than 10µm. 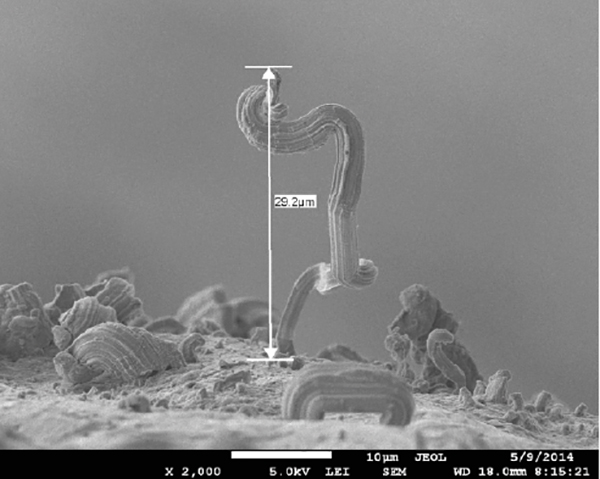 What put Sn0.6Ag0.6Cu3Bi at the opposite end of the whiskering spectrum? A balance of the right elements.

Our study subjected over a dozen alloys to a multitude of tests related to electronic solders, and we learned a lot about the creation of tin whiskers. Elementally, we found that despite silver being a major contributor to whisker growth, it is absolutely necessary to promote wetting. While 3% seems a little high based on SAC 305’s abominable whiskering performance, how much is enough and how much is too much? We found 0.6% to be the threshold where the propensity for whisker propagation outweighs the benefit of faster wetting speeds and higher wetting angles.

Bismuth stood out as a key to whisker mitigation. All the alloys containing bismuth were low whisker producers, presumably because it refines the grain structure of the metal. But, like silver, there is a threshold where too much becomes detrimental to overall performance. While bismuth reduced whisker formation and strengthened the alloy, particularly when combined with other additives, more than 4% diminished the solder’s mechanical properties and lessened its suitability for electronics applications. A content of 2 to 3% appeared to be the sweet spot for Bi.

As for some of the other elemental constituents, aluminum was a promising candidate, but quickly demonstrated issues with its ability to stabilize in the alloy early on in testing by reacting aggressively with copper and by causing excessive drossing in solder pots. Zinc also held promise in whisker reduction, but also caused too much drossing. Zinc was not as effective in tin whisker reduction as aluminum, but both showed a significant advantage over traditional SAC alloys. Nickel and germanium, while helping processing characteristics, did not appear to affect whisker growth at the levels we tested.

The environmental influence on whisker production was very interesting. Much to our surprise, neither thermal cycling nor intermetallic growth due to thermal aging showed direct, significant correlations to whisker generation, but high temperature and humidity storage did. Prior to these tests, it was widely believed that the repeated expansion and contraction of thermal cycling would induce stresses that would result in whiskers, but after 1000 cycles of -40° to 85°C, no whiskers were found. Likewise, the stresses induced by the intermetallic growth of thermal aging were expected to produce whiskers, but again, the data didn’t show it. We saw a trend where alloys that produced smaller intermetallics also produced fewer whiskers, but only one of the nine alloys analyzed showed a definite statistical relationship.

Why did the high temperature and humidity conditions cause so much whisker growth? We speculated that the environment caused corrosion, which may have accelerated recrystallization and changes to the grain structure, and influenced intermetallic growth kinetics. The addition of bismuth to the solder alloys refines the grain structure. Figure 2 compares the microstructure of the low-whiskering Sn0.6Ag0.6Cu3Bi with the high-whiskering SAC 305.

It previously had been reported that the refined and equiaxed grain structure created by the addition of bismuth is superior at relieving the compressive stress built up by IMC growth.1 The data we generated supported this hypothesis. Not only did the Bi-containing alloys grow fewer and smaller whiskers, they grew them later in the storage process, indicating a better capacity to absorb internal stresses. Figure 3 compares whisker growth of several alloys. The bismuth-containing alloys grew shorter whiskers at a much slower rate than SAC 305 or SnCuAl. 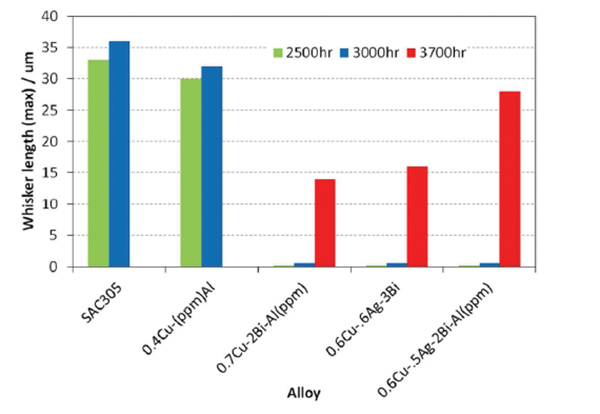 Perhaps the most intriguing findings regarded the locations of the whiskers – far away from the original points of stress, such as on the outside bend of the test specimen. Stresses travel along grain boundaries seeking relief. When they run out of boundaries, they eject whiskers. They can travel for a long time on internal grain boundaries before “surfacing.” This phenomenon is similar to that of the recent seismic activity in Oklahoma, where the stresses induced by high-pressure wastewater injection travel though the earth’s crust and manifest themselves as earthquakes up to 20 miles away from the injection site. Because the stresses travel so far, and at rates that vary due to the medium through which they are traveling, it is nearly impossible to pinpoint their original location.

With the impending adoption of RoHS 2 and elimination of exemptions for “critical” electronics, the urgency to find a viable solution to the tin whisker problem continues to intensify. Despite the facts that whiskers from tin plating have shut down a nuclear power plant,2 rendered a $250 million communications satellite a “doorstop in space”3 and allegedly caused sudden acceleration in automobiles,4 government regulators continue to enforce and expand a ban on the one material known to stop whiskers: lead. As an industry, that leaves us no choice except to keep searching for new material combinations that can mitigate whisker production better than the current default SAC 305 alloy. This study shows that while we cannot yet completely eliminate the tin whisker phenomenon, we can substantially reduce our risk exposure to it.

In parallel with this study, our business analysis indicates that the Pb-free solder market is beginning to fragment itself as end-users seek alloy compositions with properties tailored to meet their specific needs. As electronics are adopted into new applications and environments, cost and performance requirements continue to evolve, and the trend of OEMs seeking improvements on one or two key material properties is steadily increasing. To serve this emerging demand for semi-custom solder materials, new test methods are being studied that could drastically reduce alloy development cycle times.

There will inevitably be a number of Pb-free solder alloy combinations that demonstrate superior performance in mitigating tin whiskers, but none will be without compromises. Enhancing one property in a material almost always comes at the cost of sacrificing a bit of another. If the proper balance of reliability, processability, manufacturability and recyclability can be struck while successfully suppressing tin whisker formation, the commercial potential for such a solder alloy is tremendous.

The race for “whisker-free” solder is on!​