Predictions on material transfer get a wrinkle.

When you’re pushing the limits of area ratio rules and trying to realize an acceptable result out of a shrinking window, even the slightest dimensional alterations can make a big difference. That was the topic of my last column, as we looked into the impact of challenging area ratios of 0.4 (the accepted standard is 0.66), as well as the aspect ratio influence as the geometric shape of the aperture moved from a square to a rectangle. The work revealed that at an aspect ratio range of 1.6 to 1.8, the Cp values were noticeably higher than for those apertures with a 1.2 or 2.0 aspect ratio (each end of the square to rectangle spectrum). Intrigued by these results, our team pushed on with the miniaturized aperture (0.4 area ratio) shape analysis, this time to understand the effect of moving from a square to a circle.

I should note a few years back, our company also evaluated the printing performance of pure squares versus pure circles when using activated squeegee technology. Ultimately, the square apertures produced better transfer efficiency rates, which improved dramatically with the use of an activated squeegee versus a standard squeegee. However, what this previous study didn’t assess, and what our team set out to investigate this time, were gradual changes in aperture shape when moving from a square to a circle. For example, taking the Y dimension and slowly changing the radius by slight percentage increases to round the square edges and eventually move to full circle (FIGURE 1). 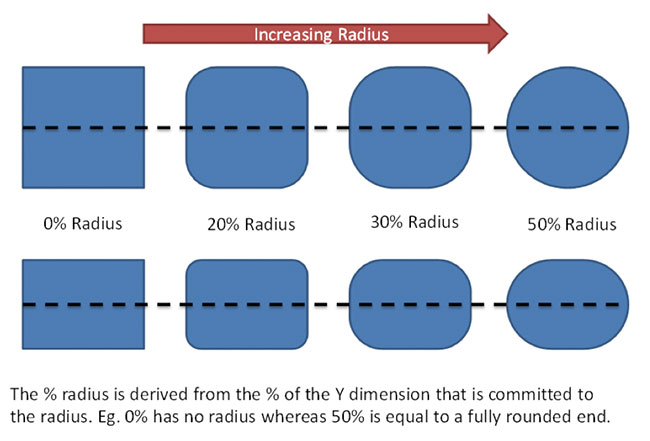 Using six different aperture designs, each with an area ratio of 0.4, varying radii percentages going from 0% (no radius) to 50% (a fully rounded end) were introduced. As with prior analyses, all of the printing was conducted using an activated squeegee, as this technology has shown marked print transfer efficiency improvements on sub-0.50 area ratio apertures. The aperture designs we selected are indicative of today’s most challenging dimensions for exceptionally small components such as 030105s, metric 0201s and 0.3mm CSPs. Just like our recent area ratio and aspect ratio work, the results were eye-opening and significant.
Looking purely at the Cp (repeatability) values, a pattern emerged in relation to the radii effect. Apertures where there were no radii (the pure square), and apertures where there was a 50% radii (a full circle), produced the worst Cp results. Surprisingly, these are the aperture shapes most manufacturers tend to use, though our data suggest perhaps they are not the most effective. What the study showed was that with a certain percentage of radii between 20% and 30% at the corners, peak Cp performance was achieved on all six aperture designs (TABLE 1). 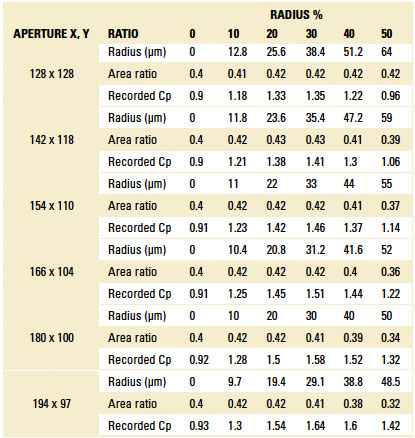 Again, the question is why? The theory from our team’s first round of work suggested similar-sized, symmetrical aperture walls (i.e., a pure square with equal sides) produce equilibrium whereby the paste release doesn’t follow a natural first to last order. That is to say the material doesn’t know where to release first, which tends to result in a random transfer pattern. According to the latest investigation, the same phenomenon holds true for full circular apertures. With rounded corners in combination with straight sides, however, our hypothesis is this creates a disruptor, which encourages release in a more predictable way. By changing the amount of flat wall the paste is sticking to, better transfer efficiency can be achieved. As seen in Table 1, from aperture dimensions of 128 x 128µm (a square) to the more rectangular 194 x 97µm, all six aperture designs showed significant Cp improvement with Y-dimension radii of between 20% and 30%. The best Cp result was observed on the 194 x 97µm rectangular aperture with 30% Y-dimension radii, which, incidentally, bears out our initial work showing the impact of moving from squares to rectangles. Realistically, the minimum acceptable Cp result for a wet print process is 1.33 Cp, which is a Four Sigma process. All the aperture designs with a 20% to 30% rounded edge performed better than Cp 1.33, with the rectangular aperture and 30% radii at 1.64 Cp.

Again, with area ratios at a super-demanding 0.4, any enhancement to paste release is worth shouting about. And, improvements this significant are notable indeed. I suspect similar results would occur at area ratios above 0.4 and up to about 0.55, after which the bandwidth in the process is comparatively larger, and the impact might not be as clearly observed. Industry movement toward thinner, smaller devices and the eventual mainstream inclusion of today’s leading-edge component types (030105s and the like) will require manufacturers to throw everything they have at the process – from machine capability to optimized stencil design – for a reliable, repeatable result. It’s time to go all in!