Reliability Beyond the Print

Achieving high-yield print transfer efficiency within assembly dimensions that continue to diminish has been the central focus of many of my columns. Frankly, I don’t see that changing any time soon, as miniaturization is the most pressing challenge facing today’s assemblers. Handheld devices are getting smaller and more capable, driving down device footprints and component pitches. From a printing perspective, however, facilitating printing for smaller devices alone is not what adds the complexity, as reductions in stencil thickness can accommodate small feature printing. Rather, it is the integration of small and large components (heterogeneous assembly) which require varying volumes of material that is pushing the limits of standard printing methodologies. While tools such as stepped stencils or dual printing could offer a solution, these approaches are not ideal high-volume, production-ready techniques. The ultimate objective, naturally, is to satisfy the material volumetric requirements for larger and smaller print deposits using standard printing methods that deliver not only print process robustness but long-term solder joint reliability.

Ensuring good solder joint (component) reliability for small devices such as the 0.3mm CSP alongside larger components depends on the ability to achieve good paste transfer efficiency for sub-0.5 area ratio print processes. In previous columns, I have discussed how activated squeegee technologies can positively influence printing results for challenging print area ratios. Whereas our company has proved activated squeegees can deliver a clear print process improvement over standard squeegees for area ratios between 0.4 and 0.5, we have now taken this analysis a step further to understand how employing an active squeegee may affect long-term reliability.

Our company undertook a recent study  to look not only at paste transfer efficiency differences between active and standard squeegees, but also how those print deposits perform in rigorous thermal cycling testing, which is a clear indicator of component/solder joint reliability. Using a standard stainless steel, 100µm thick stencil with circular apertures of 160µm, 170µm, 180µm, 190µm and 200µm (which equates to area ratios of 0.40, 0.425, 0.45, 0.475 and 0.5), our team printed a lead-free, Type 4, no-clean solder paste on test vehicles containing 15 0.3mm CSP arrays. Printing was conducted with both a standard squeegee and an activated squeegee; all prints were inspected for solder paste deposit volume, were placed with 0.3mm CSP devices, and subjected to a -40°/125°C reflow regime with a 15-minute dwell time. Assemblies were wired for event detection and placed in a thermal cycling chamber.

Looking first at paste volumetrics, the results clearly showed a 200µm circular aperture was the process capability limit (at 0.5 area ratio) for a print process using a standard squeegee. Adding an activated squeegee extended the area ratio capability, and the process was robust down to a 180µm aperture (0.45 area ratio), which is 0.3mm CSP capable – and beyond.

The results of thermal cycling delivered similar results, indicating use of an activated squeegee offered a more robust print process and could enhance solder joint reliability performance. After 1,500 thermal cycles, the data revealed that using an activated squeegee does, indeed, have a positive impact on solder joint reliability at the sub-0.5 area ratio level. After assembly, all components were tested for electrical continuity. A number of open joint failures and shorted solder bumps were observed with components assembled using a standard squeegee print process. Alternatively, those components assembled with an active squeegee print process had 100% electrical continuity. These results certainly align with the printing performance and the process capability differences between standard and active squeegees, which are now understood to be predictive of electrical integrity. As print process capability drops, assembly yield is negatively impacted. FIGURES 1 and 2 illustrate the dramatic difference in printing and assembly yield robustness of 170µm circular apertures for a 0.3mm CSP. 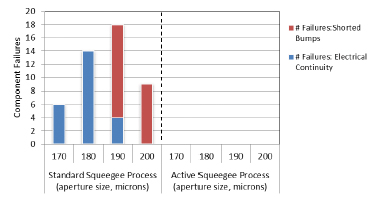 The correlation between process capability using an active squeegee to that of assembly yield and reliability is significant for heterogeneous assembly. Using 180µm circular apertures on a 100µm thick stencil will permit 0.3mm CSPs to be printed alongside standard components in a heterogeneous print process without the use of exotic materials or alternative stencil architectures. This bodes well for the future success of miniaturization.