The “other” major electronics manufacturer in Everett, WA, is spreading its wings.

Everett, WA, may be synonymous with Boeing. But venture down the tree-lined street from the aerospace behemoth, and you’ll find the headquarters of electronics manufacturer Applied Technical Services, a privately owned, staff-focused endeavor in a gorgeous 65,000 sq. ft. facility.

It may soon fill every last inch. Over the past three or four years, the company has grown 15% to 20%, and demand is trending up. Big investments in new capital equipment are adding to the mix, fueling potential future expansion.

It wasn’t always this way. Founded in 1984, ATS had its roots in a humbler setting. (When it made its first move in 1989, the new building was only 7,000 sq. ft.). The contract assembler took a big step forward in the mid-2000s. First, in 2004, it added a second plant, this one in Mexico. The following year it acquired the US assets of Three-Five Systems, another EMS firm that was undergoing bankruptcy, and relocated from previous digs in Bothell, WA, to its current locale. 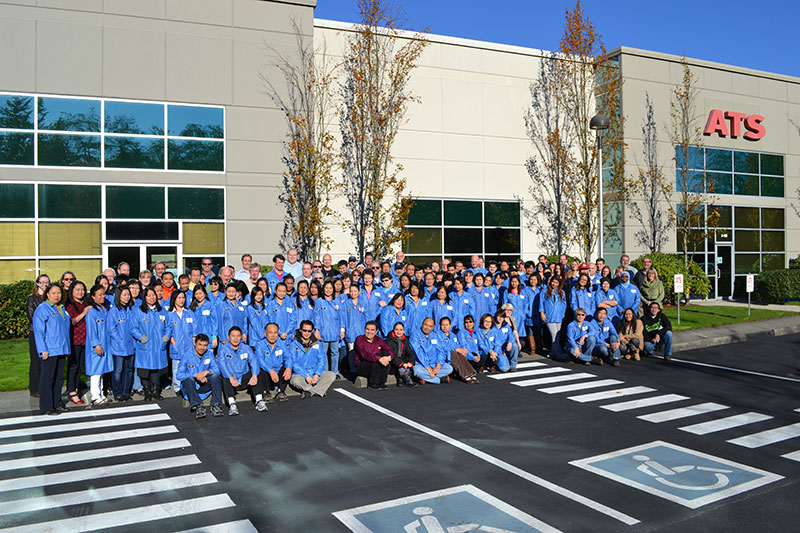 SERVICE-ORIENTED Employees gather in front of the company’s plant in Everett, WA.

The plants in Everett and Hermosillo, Mexico, are similar in many ways. The equipment sets are identical in number (three) and models. But while the Everett site is the larger of the two, it might not be for long.

The Hermosillo facility is 25,000 sq. ft. at present, but the odds are it increases over time, says Craig Young, vice president of business development.

“In five to 10 years, Mexico may be bigger” than Everett, Young told Circuits Assembly during a private tour in May. It is already closing the gap in personnel, with 200 staff members in Mexico, versus 240 in Everett.

“We are looking at three modules for one of the lines,” Young said. The company is also “trialing” a recently purchased 3-D AOI on one line. On the other two lines are 2-D AOI.

Starting in 2018, Applied Technical Services replaced nearly all its SMT equipment on three lines, and Young said they replace machines every two to three years. In the beginning of last year, it spent $2.5 million on new equipment. “It’s really about what we need,” he said about capital equipment spending.

On the shop floor, it was noticeable ATS is on the cutting edge of the latest technology. The Everett site is a large, open, clean u-shaped factory that starts with an incoming inspection area. Next is an ITW MPM Momentum screen printer and a CyberOptics SE 500 Ultra SPI. ATS also has a Yamaha YSM20 that’s less than a year old.

“We want a good first print at the beginning of the line,” Young said. 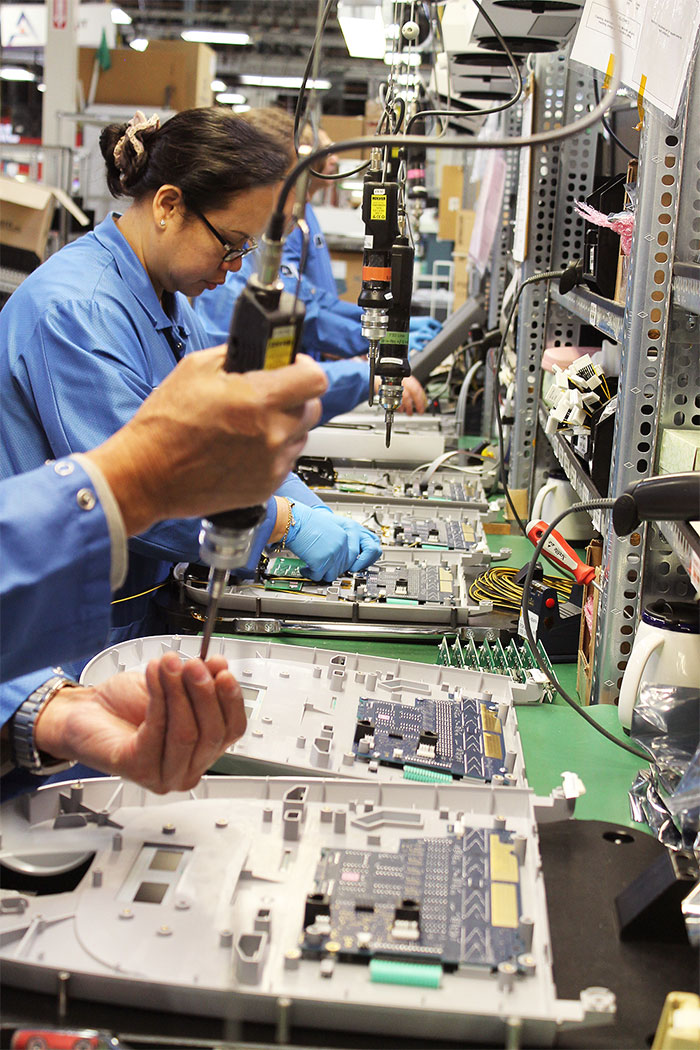 ALL IN ONE Full box-build is among the services ATS offers.

“A couple military customers have 1,800 0201 components on one board,” he said. They do “3-D imaging for height,” which “helps from a quality perspective.”

The company x-rays BGAs using an Yxlon Y-Cougar SMT x-ray machine, and for the past few months has used an ultrasonic stencil wash, which it says provides “superior cleanliness” with “no leftover paste.”

ATS has a separate test department, with six to seven designated engineers. Test processes include flying probe, ICT and functional test. The equipment list includes a Keysight Medalist i3070 ICT and a six-probe Seica flying probe, which is fixtureless and touch-less. There are three or four HP 3070 ICTs, both offline and online. Newer ones are Keysight.

Nearby, the company set up a room with blacked-out windows for an ITAR military customer that requested complete privacy. The section of the floor authorized for final product assembly includes another special room where encryption keys are loaded onto devices. It’s treated like a bank vault: One staff member cannot enter it without another staff member present.

In final assembly, ATS has three lines for one LED customer. For all jobs, the company does a final quality audit before shipping. The company does some shipping directly to end-customers.

An area is designated for material storage for “everything except SMT components,” which are “stored in the back.” There is even extra storage space for new customers. 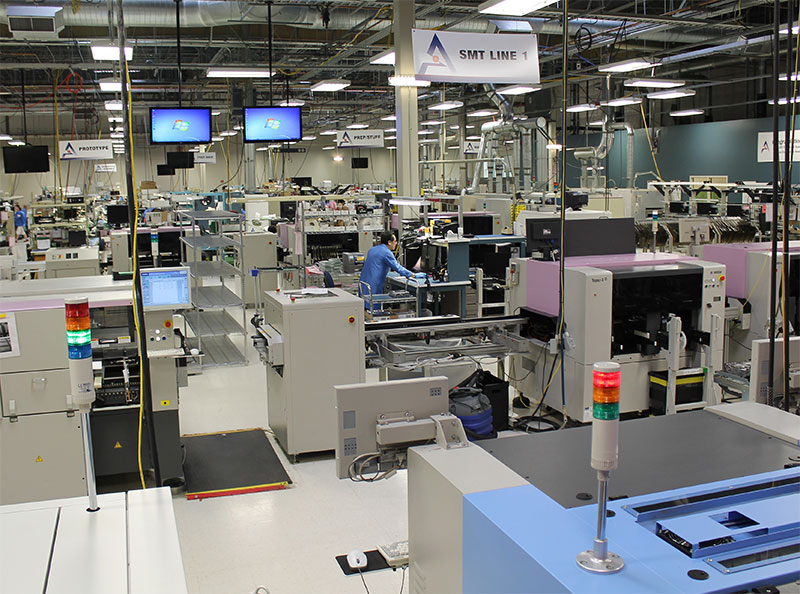 MATCHED UP SMT lines are identical in the US facility (here) and in Mexico.

One of ATS’s biggest business concerns, according to Young, is “maintaining growth.” At least one customer makes up more than 10% of the company’s business.

“The challenge is keeping that up. We have to keep existing customers growing and bring in new ones. Three to 4% growth range is standard with CMs in the industry.”

Segments served include automotive, medical, aerospace, industrial, fitness and health, and “a little consumer.” ATS is “bringing in two new medical customers that will be 25% of total revenue when ramped up,” Young said. ATS is also bringing in one new automotive customer in Mexico.

Unique technology challenges stem from the product mix. Young cites conformal coating as one. In this case, the contractor becomes the customer. For OEMs that opt for Parylene, ATS has opted to work with an outside contract manufacturer that has a “very specialized” vapor deposition capability, versus developing the process in-house. 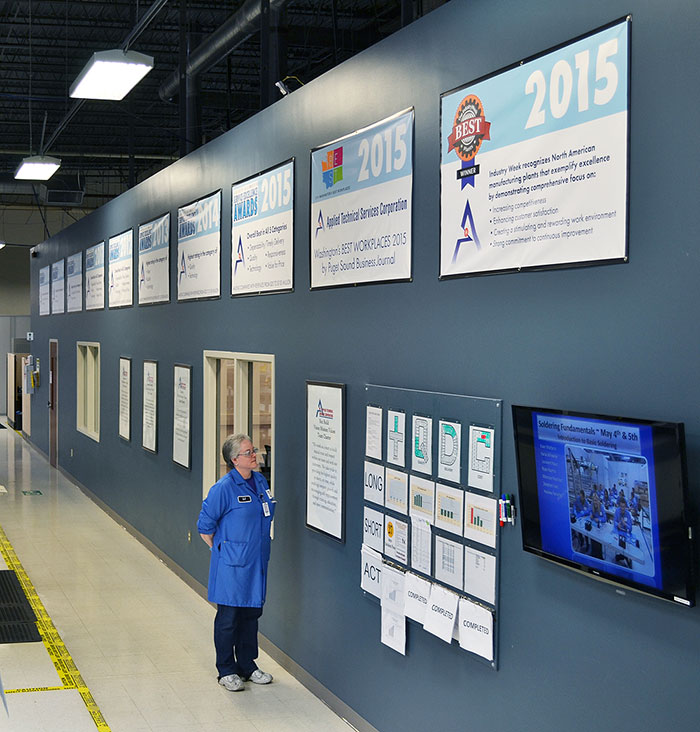 WALL OF FAME The EMS company proudly displays awards garnered over the years.

On a positive note, “the EMS supply chain is getting better,” Young said. After “a year or more of constraints, component lead times are shrinking.” Large component packages were not available. Young, like others, points to the automotive industry as the driver of the shortages. As cars became more electronic – there are some 200 PCBs in Tesla vehicles, for instance – “automotive left the other guys short. 2019 is a lot better.”

Production bottlenecks, he said, typically revolve around functional test because of process timing. “Something designed by the customer takes longer.”

For higher volume or labor-intensive work, ATS often moves the project to Mexico to reduce costs.

With all the talk about Industry 4.0, ATS hasn’t had any customers ask about it, Young added. It’s “still in its infancy. There are so many standards,” and “a lot of new equipment talks to each other anyway.”

Asked about ATS’s revenues, Young said the firm expects to enter the next highest tier of the 2020 Service Excellence Awards. That would put the firm at over $100 million in annual sales.

ATS has pursued a Lean manufacturing strategy and certifications in key areas to help build its growing customer base. It counts ISO 13485, AS9100 and ITAR among its certifications.

ATS is a long-time participant of CIRCUITS ASSEMBLY's awards program, which is based entirely on customer feedback, winning multiple accolades in the $20 million to $100 million category. The company also recently won a Best Plant Award from IndustryWeek, which involved a thorough audit. The award is based in part on Lean manufacturing principles. Nearly 400 companies entered, Young noted.

The positive company culture doesn’t stop there. Circuits Assembly’s site visit coincided with lunchtime. A huge cafeteria with giant vending machines and healthy food was filled with dozens of employees eating together, smiling and laughing – like a well-adjusted family. Employees exercised in an onsite gym. There’s even a ping pong table.

When asked what three things ATS wants to be known for, Young didn’t hesitate to answer: “quality, responsiveness, and attention to detail.”

Based on our visit, that’s more than a possibility. 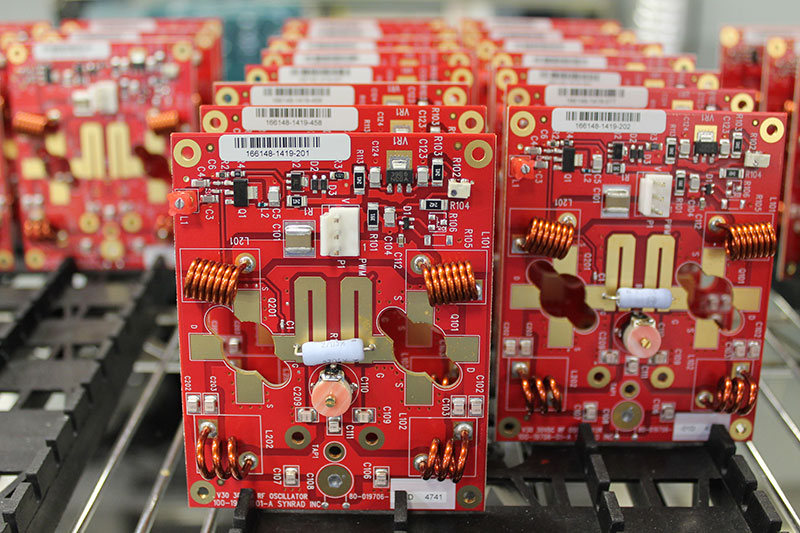 NO MIX-UPS Samples of the mixed technology boards ATS assembles.