While cellphones still consume 20% of the world’s PCB output, growth comes with the cars.

The author started to compile the world’s top printed circuit board fabricator data in the mid 1990s. Around that time, no convenient word processor was available, and reports had to be written in long hand. The oldest digital data he found is the NTI-100 1998, which was published in PC Fabrication.

The author became a member of IPC’s world PCB assessment team, with Ray Pritchard as the head, in the mid 1980s. In the beginning, the members consisted of laminate makers (US laminate makers still dominated the world at that time), material makers (dry film, chemicals, etc.) and a few PCB fabricators (for which he worked). The team disintegrated in the late 1990s, as US laminate makers’ market position weakened and materials makers stopped contributing. The team was great!

After the team fell apart, he realized the most accurate way to collect data on world PCB output was to sum up the revenues of top fabricators using an “80/20” rule of thumb, as in 80% of the output is made by 20% of the total engaged in the industry. In our PCB industry today, this rule is more like “95/5,” with 95% of revenues produced by 5% of the companies. The NTI-100 became a byproduct of the assessment of the world PCB output.

Many top PCB makers are now publicly traded. Therefore, it is easier to obtain PCB statistics from their financial reports. For example, most top Taiwanese PCB makers are public, and it is easy to obtain their revenue data, although ascertaining their output in China and Taiwan is a different matter (not easy at all). A similar situation prevails with Japanese and South Korean manufacturers.

By contrast, Chinese companies are quite frequently obscure because many are not publicly traded and own subsidiaries whose names have little or no resemblance to the parents’. Collaboration with CPCA is very valuable. Personal friendships with industry personnel have been helpful for many years too. The author would like to thank the helpful organizations and individuals without which the NTI-100 would not have been possible. In some cases, a wild guess had to be adopted when manufacturers are part of large organizations and no specific PCB data have been published. Therefore, there are some flaws in the list. However, “absolutely accurate” data are not possible to compile by one individual. A poor excuse, he is afraid.

After 20-odd years, he tires of repeating the same thing every year. How long can the author continue to compile the NTI-100? God only knows.

Before plunging into the latest NTI-100, it may be interesting to review what the industry was like 20 years ago (TABLE 1). Of the top 100, South Korea’s ISU Petasys was near the bottom of the $100 million-plus list (number 69). The fabricators that went out of business and/or were acquired and have different names today are indicated in red. Why some went out of business, sold or grew may be an interesting subject for a case study at Harvard Business School!

Viasystems was founded with AT&T Richmond and Circo Craft as its base organizations. After many ups and downs, it is now an important part of TTM Technologies. Hadco bought Zycon and eventually became Sanmina. Matsushita Electronic Components (today, Panasonic) closed all but one PCB shop. The remaining factory is in Suzhou and manufactures about 70,000 m2 of single-sided boards (estimated about $7 million output annually). It is little known, since Panasonic never mentions the existence of this factory, which is next to its FR-4 and CEM-3 laminate factory.

One of Johnson Matthey’s factories (the original company was Advanced Circuits Inc.) changed to Honeywell, then to Allied Signal, then to Johnson Matthey, whereby it disintegrated. That plant, the old Cray Research site in Chippewa Falls, WI, is the flagship factory of TTM today and is the single largest factory in the US, with estimated revenue of about $180 million.

Photocircuits, where the PCB career of this author started in 1965, was closed in 2007 after 56 years of operation.

It was killed by low-cost Chinese products. At one point, it had nearly $400 million worth of automotive PCB business, which would have made Photocircuits one of the largest automotive PCB makers in the world even today. IBM had three large-scale PCB factories: Endicott (NY), Yasu (Japan) and Sindelfingen (Germany). Endicott survives as i3 (annual sales about $30 million?). The Yasu factory is a part of Kyocera. Sindelfingen became STP but eventually was shut down. The land where STP stood is now a part of Mercedes-Benz’s factory. NEC sold its PCB business to Toppan Printing, becoming Toppan-NEC. It is now also part of Kyocera. Tyco PCB is now one of the core plants of TTM. Toppan’s fate is the same as NEC’s. Sony’s PCB factories in Japan, Suzhou and Bayonne, France (in transition, it became a part of Ruwel Werke of Germany) were all shuttered. Praegitzer went down with two plants in Oregon. The author has nostalgic feelings about these makers because they provided an excuse to travel to those areas.

Dover International (DII) merged with Multek (Hong Kong-based Astron became the core of Multek), and today is a wholly owned subsidiary of Flex, formerly Flextronics. The plant site is called “B5.” Termbary/Kalex was sold to Viasystems and is now part of TTM. Airex was sold to a Japanese maker, Kyoden. One surviving factory of Wong Circuit in Huiyang, China, is part of TTM. Alcatel had several PCB subsidiaries, but the only one to survive is in Coutances, France, which became ELVIA (and unfortunately not yet in the NTI-100).

Fuba was one of the oldest PCB companies in Europe, founded around 1957. In the early 2000s, it was sold to Fuba Tunisie (50%) and a Russian laminate maker. It was shut down eventually. Fuba Tunisie was founded in 1993 as a JV between a Tunisian industrial company and Fuba. Now it is a completely independent maker and the largest in Africa. Fuba Tunisie is a striving fabricator, growing every year.

Unicap went bankrupt. Merix was originally Tektronix, founded in Forest Hills, OR. It purchased a PCB division of Hewlett-Packard and Wong Circuit. It was then purchased by Viasystems, which also bought DDi. As mentioned, Viasystems was bought by TTM. The Forest Grove factory of the original Merix remains as an important factory of TTM today.

Worldwiser became the core of Unimicron Technology. Sharp’s PCB subsidiaries were all shut down. Automata became part of DDi and is now part of TTM. Canon Components left the PCB business in 2000, but in 2012 built a small shop in Thailand. Why? Fujikiko was sold to Kyoden. Philips had several PCB subsidiaries: Eindhoven (The Netherlands), Croydon (south of London), Evreau Cédex (France) and Klagenfurt (Austria). The last to be shut down was Klagenfurt, as part of AT&S. Pentex-Schweizer is now part of Sanmina (Singapore and Wuxi, China). SSK was bankrupted. Viktron was bankrupted. Toshiba (B2it) sold its core PCB business to Dainippon Printing, which shut it down, but Toshiba still has a very small captive shop outside of Tokyo (Ohme City). Astron is now Multek, as mentioned. Prestwick was shut down. Microser SA of Madrid was sold to Tyco, which shut it down after a few years.

Pacific Circuits became the founding base of TTM Technologies. TTM stands for “Time to Market.” Circuit Systems was bankrupted. Bureau of Engraving was shut down. Bureau was a JV partner of Toppan Bureau of Engraving. Cire Group of France went out of business. (One or two organizations may be still in business.) Litton ACD went out of business. Photo Print Electronics (PPE) was sold to Würth Elektronik. Yamanashi Avio was sold to Oki Printed Circuits. It so happens that Japan Rail Road plans to build a new high-speed train system through the property of Yamanashi Avio (a magnetic levitation train, which connects Tokyo and Osaka in one hour – a 500km distance). Oki Printed Circuits lucked out!

Sumitomo Bakelite shut down its FPC factory in Akita Prefecture years ago. Sumitomo Bakelite was a 20% shareholder of Sheldahl at one point, which is now a part of Multek. Its remaining factory in Hanoi was sold to Sumitomo Electric Industry (“Denko” in Japanese). It built a gigantic $300 million flex circuit plant next to the purchased factory in Hanoi in 2015-16. Yashin was bankrupted by an accounting scandal. Its Dongguan factory was sold to Wuzhou Technology, and the Wuzhong (Suzhou) factory sold to Tigerbuilder.

ADflex Solution was sold to Innovex, which went out of business. Eastern was sold to South Korea’s Simmtech in 2016, but Simmtech has not taken Eastern’s 2016 revenue ($93 million) into its revenue data yet.

The above history is like a melodrama. Looking at the 2016 list (TABLE 2), some grew by mergers and acquisitions (TTM, Unimiron, Kyoden, etc.), but the majority of large fabricators grew organically. It seems what ticks for some makers does not tick for others. (Note: “shut down,” “bankrupted” and “closed” are used synonymously in this report.)

Since so many changes took place in the North American PCB industry, FIGURE 1 may be interesting. Some companies changed ownership at least two to three times. Many surviving firms grew tenfold, some even 30-fold (TTM Technologies) in the past 20 years. One thing in common with those growing fabricators: the growth all came from their China investments. Domestic demand for PCBs will not perish, since there is always a need for quick-turn, prototyping and low-volume/high-mix products, and also extremely complex PCBs. Can fabricators engaged only in those areas of activity grow in revenue? The author doubts it. The only way to grow in the domestic market is to acquire competitors. And with that comes duplicate customers. 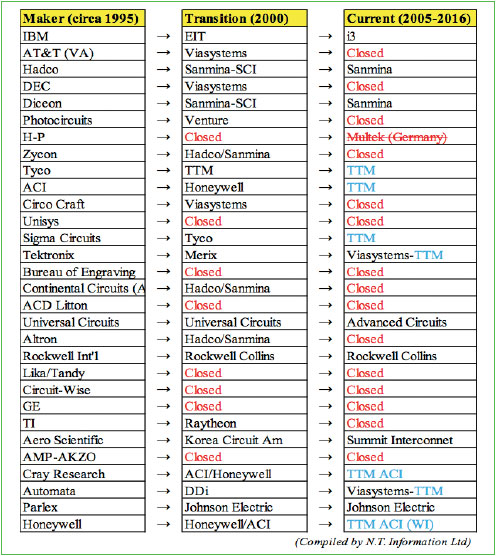 Figure 1. The transition of top US fabricators, 1995 to today.

Exchange rates. TABLE 3 shows average 2016 exchange rates of major currencies against the US dollar. China’s yuan (RMB) at the time of this writing is quoted at 6.76 RMB/US dollar. 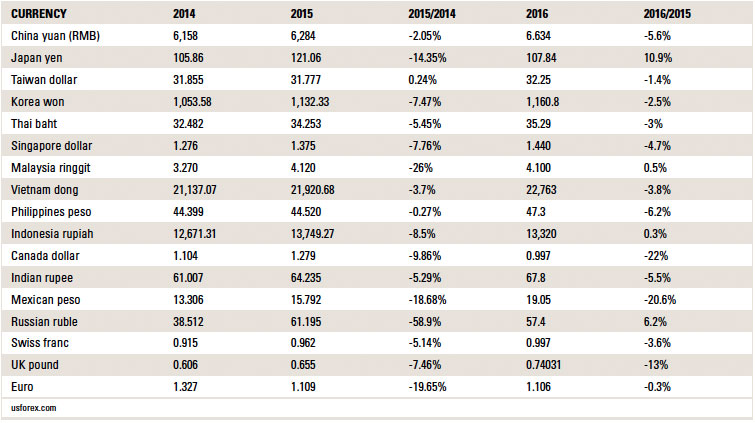 NTI-100 2016. Since many Chinese new entries may not be familiar to the readers, the author decided to replace usual simple comments by “local names,” although they may not be useful to most readers. (Using the local language names is useful to the author in order to avoid duplicates.) As mentioned, some data are rough estimates due to uncertainties regarding the figures for some companies. Take, for example, Kingboard Chemical. Its annual report states its PCB revenue was $980 million, with four PCB subsidiaries. In the past, it included several PCB makers under its control. The author decided to let it reflect the annual report.

In the 20 years since 1998, PCB makers have become more involved in assembly and other businesses. In 1998, the output of PCB makers was almost entirely from bare boards. In some cases, such as TTM Technologies, Kyoden, Shirai Denshi, etc., assembly and other business portions are separated from the total revenue, but in almost all instances the revenues reported included non-bare board businesses. The author did not bother to separate these. If he had, he would have ended up opening a Pandora’s box. He is afraid, therefore, the comparison may be apple vs. oranges, but under the circumstance, NTI-100 2016 is the best revenue data of the world’s top makers he could come up with.

Everyone knows that in 2016, Nippon Mektron, Sumitomo Denko and Fujikura of Japan and Zeng Ding Technology and Flexium Technology of Taiwan were the major suppliers of flex circuits (all assembled) for the iPhone 7 and other types of iPhones. At the end of 2015, Apple is said to have had considerable inventory, and as a result, FPC orders by Apple nosedived in the first quarter of 2016. TABLE 4 confirms the story. (Pay attention to Nippon Mektron, Sumitomo Denko and Fujikura.) Somehow, Flexium did not do too badly in 2016 from a revenue point of view. Zhen Ding also lost revenue in 2016. 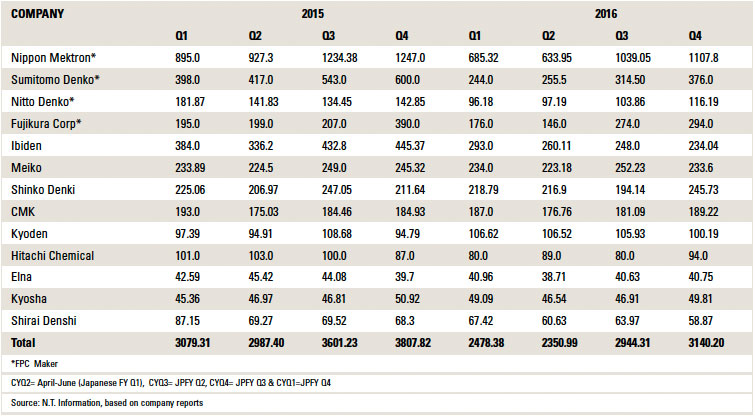 The 2016 world PCB output was stated as $58.2 billion, of which approximately 20+% went to cellphones. Considering that Apple and Samsung Electronics (SE) consumed about 14 to 15% of that, world PCB production is influenced greatly by these two giant companies.

Examining the performance of the NTI-100 fabricators, certain trends emerge:

Finally, the US is TTM Technologies, and Europe is AT&S.