Results of a study comparing traditional rework methods to a novel stencil process.

Numerous methods are used to rework leadless devices, either guided by the older IPC-7711, Method 5.4.1 process guidelines or the newest stenciling techniques. The older of these methods includes solder paste printing the site location on the PCB, followed by placement and reflow of the device. The newer method includes the device pad “bumping,” followed by placement of the device with a rework system using paste flux (Figure 1). 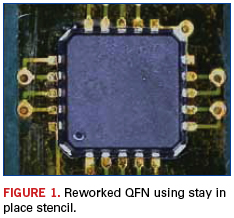 Several years ago, a simpler, faster method for reworking leadless devices was developed using polyimide stencils. In this method, a polyimide stencil is placed over the land patterns on the bottom of the device. Solder paste is then rolled into the apertures. After reflow, the stencil is peeled off, leaving “bumps” on the bottom of the device (Figure 2). A stencil permanently affixed to the PCB filled with paste flux or solder paste then acts as the receptacle for these device “bumps” to fit in to. However, heretofore the longevity of such an interconnection was questioned. This study, a portion of which is described in this writing, verifies the reliability of these solder joints using this newer technique. 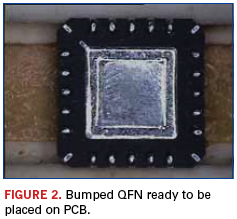 The goal of the NASA/DoD project was to generate data supporting qualification of SnPb rework procedures for military hardware built with Pb-free processes through analysis of thermal cycling, vibration and drop test data, including micro-section analysis.

Thirty of the 193 test vehicles were built for Crane, in support of the larger Naval Supply Command (NAVSUP)-sponsored Logistics Impact of Pb-free Circuits/Components project. PCBs were assembled using SAC 305 Pb-free solder alloys using boards with Pb-free component finishes. The boards had an FR-4 laminate per IPC-4101/26 with a minimum glass transition (Tg) of 170ºC for the test vehicles. Bare boards complied with IPC-6012, Qualification and Performance Specification for Rigid Printed Boards, Class 3, Type 3 specifications. The boards had an immersion silver finish and were processed per IPC-4553, Specification for Immersion Silver Plating for Printed Boards. The test vehicle was 14.5"x 9" x 0.09" with six 0.5-oz. copper layers (Figure 3). 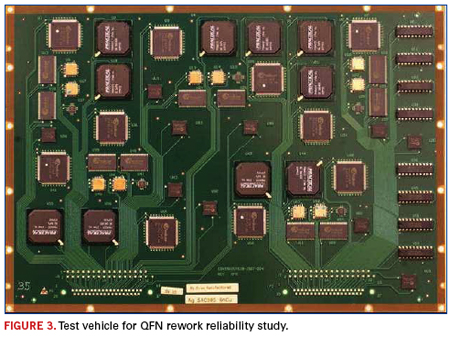 Following assembly, rework was performed on random Pb-free DIP, TQFP-144, TSOP-50, MLF, LCC and the QFN components of interest using SnPb solder. Components were reworked either once or twice. QFNs were reworked using two methods. In the first method, boards were PCB device locations paste-printed on the boards using rework systems. Devices were removed per IPC-7711, Method 3.11. In the second method, parts were bumped IPC-7711, method 5.8.1.2. Once bumped, the parts were inserted into the stencil on the board. The matrix of the experiment is in Table 1.

The particular focus of this paper is related to the QFN package (A-MLF20-5mm-.65mm-DC) as seen in Figure 4. The test plan was chosen to represent performance requirements in applicable military and industry standards. A key factor was selecting test parameters that would subject enough environmental stress to cause solder joints to fail, thus permitting differentiation between lead vs. Pb-free performance. MIL-STD-810F, IPC-SM-785 and IPC-TM-650 were primary references used for writing the test plan. 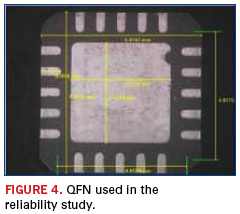 Numerous tests were part of the overall test protocol. The vibration test was instituted per MIL-STD-810F, Method 514.5 (Vibration), to determine reliability of the various solder alloys under severe vibration. Thermal cycle testing used was performed in accordance with IPC-SM-785, Guidelines for Accelerated Reliability Testing of Surface Mount Solder Attachments, to determine the longevity of the solder joints under thermal stress conditions. It was conducted at two different conditions: -55° to +125°C and -20° to +80°C. Thermal cycle tests were run until greater than 63% of component failures were achieved in order to provide statistically meaningful data. The mechanical shock test was used to determine solder resistance to the stresses associated with high-intensity shocks induced by rough handling, transportation, or field operation. The Combined Environments Test (CET) was used to predict reliability of solders under combined thermal cycle and vibration. Finally, drop testing was used to determine resistance of board-level interconnects to board strain induced by dynamic bending. These failure modes replicate the stresses seen during manufacturing, electrical testing (especially in-circuit test), card and field installation due to process issues and/or the quality of incoming components and/or boards. 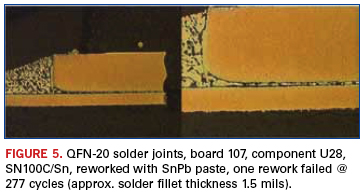 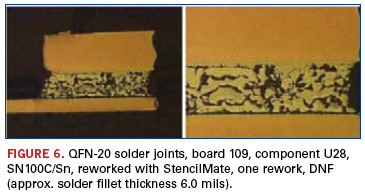 Thermal cycle testing. Thermal cycling testing was conducted between -55° and 125°C per http://teerm.nasa/gov for NASA-DOD Lead-Free Electronics. The temperature was cycled between -55° and 125°C at a maximum rate of 10°C/min and a dwell time of 30 min. at 125°C and 10 min at -55°C. A total of 4,068 cycles were completed. Electrical continuity was continuously tested, and failure was recorded corresponding to the total number of cycles. 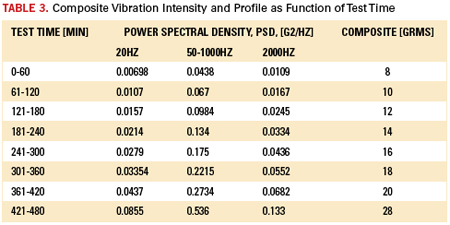 Based on the extensive reliability testing undertaken in this study, it was determined that independent of the QFN rework method, the polyimide stay-in-place stencil technique performed at the same level as traditional board paste printing. Based on thermal shock and vibration testing (as well as shock, combined environmental and drop testing), there was no difference between rework methods. These results have shown that this simple-to-implement technique has been shown to not impact the reliability of a reworked device. In fact, the microsections indicate that the stay-in-place polymide stencil technique, if time allowed, would outlast traditional hot air rework methods.