Don’t get caught with your bath down.

The topic of hot air solder leveling (HASL) has come up a handful of times recently and so the motivation for this column. An OEM currently using HASL but with advances in board designs had observed last month that the ball grid array patterns were not covering properly. They also experienced instances when component placement was off due to the uneven nature of the HASL deposit. They requested some information on “alternate finishes.”

The call came about 10 to 15 years later than I expected. A few days later, I visited a North American plating shop that finishes the majority of its products with various electrolytic and electroless nickel/gold plating. A “good percentage” of its product remains HASL, and they asked when HASL would go away. The process is not a favorite among the operators.

When I came to MacDermid 15 years ago, the industry was investigating alternate surface finishing. The term “alternate” referred to anything that was not HASL. The buzzword was planar; there was a need for a flat surface finish to accommodate new designs with miniature components. As a result of components getting smaller and, specifically, the use of BGAs, HASL was becoming difficult to use. The uneven surface could not ensure proper component alignment or connectivity. In addition, substrates were getting thinner, and the laminates could not withstand submersion into molten solder. For many, the need to switch from HASL was imminent.

My first business trip in the industry was to the coast of England to install an immersion silver process. I was fresh out of college and had been convinced that immersion silver was the next-best surface finish and that it would replace this thing called HASL that was a hassle to run.

So the chemistry was installed and I left for lunch while the bath heated up. When I got back from lunch, production was running. The line engineers were overjoyed that the silver covered on the first pass, so they did not feel we needed to run any test parts or analysis before production. (Hopefully my boss is not reading this.) I spent about two weeks in England training the customer and the local teams on how to run this process. I spent hours walking the line, but adjacent to the immersion silver line was a vertical leaded hot air solder level machine. The line was down every third day, and each time the line was shut down, an operator had to physically wedge himself into the unit for maintenance. I could not believe it. I had spent the past six months using a solder pot and a benchtop wave soldering machine, which I grew to respect out of necessity very quickly. I would never shove myself into a machine that runs at such temperatures. HASL requires an exorbitant amount of equipment maintenance compared to other surface finishes and to what benefit?

People will continuously say that there is no one surface finish for every application, and I believe that to be true. Overall, the benefits and weaknesses of each surface finish are pretty obvious. Where we get into trouble is when we stop using the surface finish as a solderability preservative and leave the metal areas unsoldered. With that, the issues of shelf life and environmental resistance become much more important. For this there are two camps: One will say that HASL is the better surface finish choice because it is a thick deposit that will prevent underlying copper from corroding. The other camp will remind the first that HASL has a lot of surface ionic associated with it from flux residue that will promote more surface corrosion. I personally agree with the latter, but also have seen when HASL has not covered pad edges, leaving copper exposed. I have also witnessed small features that did not cover properly on the first pass; the need for a second caused solder mask fracturing and a lot more exposed copper for further corrosion.

So few companies still use HASL that it is probably facing extinction. I know someone just threw the military/medical card. Make sure you are not looking for a last-minute alternative because the fabricator just said they are getting rid of the HASL line to make more room for ENEPIG. 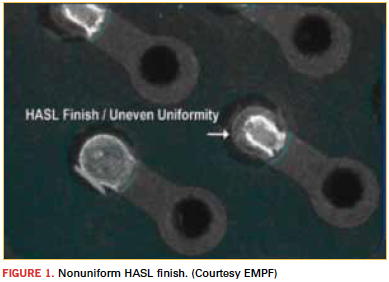