As the first distributor DNA-marked components are shipped, a look at how parts are “tagged” and traced.

SMT Corporation, an independent stocking distributor of electronic components, has begun shipping components marked with a DNA (deoxyribonucleic acid) taggant. The taggant was developed by and is supplied by Applied DNA Sciences (APDN) of Stony Brook, NY. The purpose of the marking program is to give the component user unalterable and traceable access to the part’s history and origin when marked and shipped by the original component manufacturer. In the case of open-market parts sourced by SMT, they will only be marked after they pass through its counterfeit mitigation and component quality inspection process.

The application of SMT’s DNA mark on a specific passing lot of components will effectively draw a line in the sand of provenance composed of detailed quality and authentication inspection documentation easily traceable back to an accessible copy of the SMT inspection report, a document that is valid for the life of the part. This DLA mandate to mark FSC 5962 microelectronics was announced in August, and would be required as of November.1

Depending on who marked the part, the taggant will provide to the user the downstream pedigree or provenance of the part throughout the entire subsequent path of the part. Carefully controlled during its evolving infancy within the electronics industry, the taggant will create what Tom Sharpe, vice president of SMT, believes to be the beginning of “our reliable wall of prevention” against counterfeiters.

“The severity of the counterfeit problem demands all parts that can be procured from the original component manufacturer, its authorized distributors or authorized after-market distributors, must come from those secure supply chains whenever possible,” Sharpe points out.

“It is only after those options have been thoroughly exhausted that a contractual procurement from a well-vetted open-market supplier should be considered.”

Until now, the absence of such proof has permitted the easy penetration of supply networks by counterfeit electronic components. It has also led to discoveries of counterfeit components installed in numerous sensitive defense and aerospace applications. And it has permitted the existence and continued operation of component distributors that seek big profits by buying components from highly suspect sources and reselling those components as authentic.

The DNA taggant will be carefully and permanently applied onto the surface of the components in SMT’s laboratories in Sandy Hook, CT. SMT buys components from respected authorized sources wherever possible – sources where authenticity can be safely assumed in most cases. When parts are obsolete and unavailable from trusted aftermarket manufacturers, it then becomes necessary to turn to the open market. In those cases, SMT conducts an exhaustive forensic component inspection to determine that the components are not counterfeit, and only then will provide them to defense and aerospace manufacturers, as well as all other high-reliability industry OEMs.

The intensive documented screening processes performed by SMT, together with the objective-evidence documentation provided with parts shipped, have made them the vendor of choice by many when it comes to procuring legacy components from the open market. Legacy components are those components no longer in production but vital to maintaining the readiness of military systems over time periods that may run to 20 years or more. SMT’s contract makes it clear to its suppliers in the open market that components found to be counterfeit will not be not paid for and will not be returned to the source.

The company has also devoted years to acquiring the tools and the sophisticated, detailed expertise to identify even the most clever counterfeits. A decade or more ago, counterfeits could often be identified by misspelled markings or crude imitations of logos. Today the tipoff to SMT may be the way the surface texture appears in a scanning electron microscope (SEM) at 5000x magnification, or the careful comparison of elemental analysis data gathered with x-ray fluorescence or energy-dispersive x-ray against the OCM’s materials composition data sheet.

SMT uses multiple technologies beyond visual inspection and optical microscopy, such as SEM, EDX, scanning acoustic microscopy, digital microscopy, real-time x-ray imaging, XRF, cross-sectioning, de-lidding and die matching, solvent testing, electrical test, solderability testing and several others to evaluate large and small lots of diverse components (Figure 1). Some of these components are of course counterfeit. SMT’s technicians thus have a constant supply of components of unknown provenance, from which experience and databases can aid in spotting the many tiny anomalies that expose counterfeits. 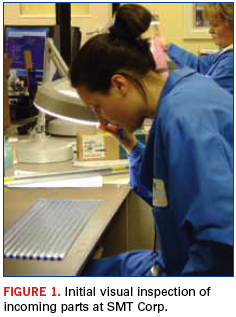 In 2009, for example, they discovered a new coating virtually identical to the epoxy used in plastic-packaged components and immune to acetone surface-test swabbing used in the refurbishing of scrap components to sell them as new. The original component surface and markings were sanded off and new coating and markings applied. The initial tipoff was that the “superbug” coating was not applied perfectly on all parts. By the time the counterfeiters had improved the coating application process and were shipping lots of more consistently coated parts in 2010, SMT was working with a heated solvent (thanks to Honeywell Aerospace) that would dissolve the superbug coating without dissolving the epoxy.

APDN developed and manufactures the taggants in the new program, which is known as SigNature DNA. The taggant has been described as a botanical DNA molecule that has been scrambled.2 One may think of the millions or hundreds of millions of bases in a DNA molecule, and the vast number of ways in which they could be rearranged, but the actual process is even more complex and non-reproducible. We are accustomed to think of DNA as fragile, and in its normal state, it is fragile. But APDN’s DNA has been processed to make it vastly more robust; it survives with its identifying structure intact.

SMT is the first distributor to ship DNA-marked components. The first shipments were preceded by a two-phase 18-month DLA project managed by the LMI consultancy, with supply chain participants, including SMT. The purpose of the two-part pilot program was 1) to demonstrate that components marked with SigNature DNA could move through supply channels, and 2) to work out the shipping, handling and pricing details of distribution throughout DLA’s microcircuit supply chain.

Toward the end of the pilot program, the DLA on Aug. 7, 2012, issued a mandate requiring that all FSC 5962 microcircuits supplied to the DLA be marked by SigNature DNA.1 Specifically, a new clause in solicitations and contracts “requires contractors to provide items that have been marked with botanically-generated DNA produced by Applied DNA Sciences or its authorized licensees, if any.”1 Less than a month later, APDN and SMT announced the first-ever contract agreement to begin shipping components with DNA provided by APDN.

The DNA technology has already been used to mark a range of products, including cash being moved to and from banks in the United Kingdom to wool suits made in the north of England. In an early phase of the collaboration, components made by Altera were DNA-marked. Some were then shipped to a distributor, while others were retained at Altera. Included in the lots of parts were some with no DNA taggant. Swabbing a total of 44 parts at both locations correctly identified those parts that were the specified Altera products and those that were unmarked (and therefore not traceable).3

During the pilot program, the DLA engaged an independent laboratory to attempt to defeat the DNA technology – in other words, to find some means by which counterfeiters could circumvent the technology. No such means could be found.

The taggant as applied on components shipped by SMT will be covert, i.e., invisible. The recipient of a lot of marked components scans them with a handheld detector, which will cause the taggant, even if covert, to emit visible light (Figure 2). The laser does not “read” the taggant; it simply affirms that a taggant has been applied. 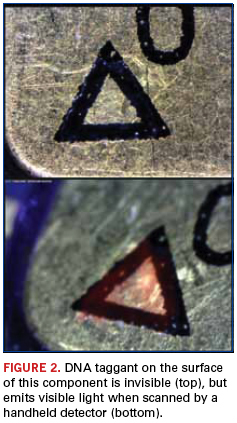 For specific and fully forensic verification, the recipient swabs one or more components in a shipment (Figure 3) and sends the swabs to APDN. In 72 hr. or less they will learn whether the taggant matches perfectly the APDN taggant that was applied by Manufacturer/Supplier X onto Part Y. Applied DNA states that the mark is flatly not copyable. Counterfeiters hoping to create a credible counterfeit part will find that duplicating APDN’s taggant is a fantastic impossibility. 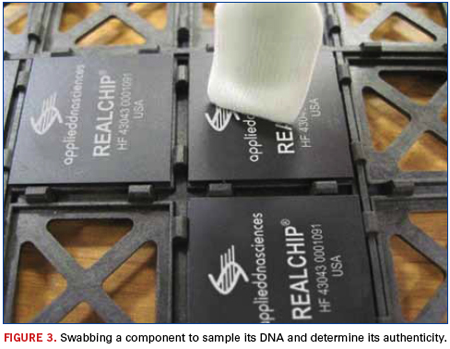 The DNA taggant can be embedded in the ink already used to mark many types of components. If the manufacturer uses ink, there will be no change to line processes, simply a switch to the taggant ink, which is being supplied by Markem Imaje. If a component is currently marked only by a laser-etched label, a visible or covert ink dot can be added. The surface to be marked by the taggant can be plastic, metal or ceramic, can be very small, and does not need to be flat. For security purposes, a company’s unique DNA formulation will be changed every 12 months, although it may be changed at a shorter interval if desired.

In the short-term, DNA-marked components will become a powerful tool in weeding out counterfeits from components flowing into defense and aerospace use. The personnel who depend on their equipment to perform as required will have enhanced reassurance that it contains no fraudulent electronic components.

Tom Adams is a consultant to SMT Corp. (smtcorp.com).