Germany’s Zollner, the largest privately held EMS in the world, has been inching into the Americas for years. Has its time to shine finally come?

It took hundreds of years for what is now Europe to make their mark on what is now the Americas. Explorers made attempts in the 10th Century, only to fizzle out. It wasn’t until Columbus made his famous crossing in the late 1400s that Westerners established a permanent foothold.

Chalk one up to patience.

There are parallels to Zollner Elektronik’s venture west. Now several years in, the effort is beginning to look like it will turn out hugely profitable as well.

Before setting sail, Zollner had already established itself as the world’s largest privately held EMS company. Formed by Manfred Zollner in 1965 in the German town of Zandt near the Czech border, it had reached the $1 billion revenue mark and surpassed 6,000 employees when, in 2009, the firm struck a deal to breach the US shores. The new partnership with EIT, a Sterling, VA-based EMS company, called for the firms to jointly offer facilities and share resources, including manufacturing and engineering, and included a financial stake in the US company.

Still, it took another two years for Zollner to break out on its own. In late 2009, it started work on a 52,000 sq. ft. NPI center in Milpitas, CA. The plant was the  company’s first on the West Coast of the US. 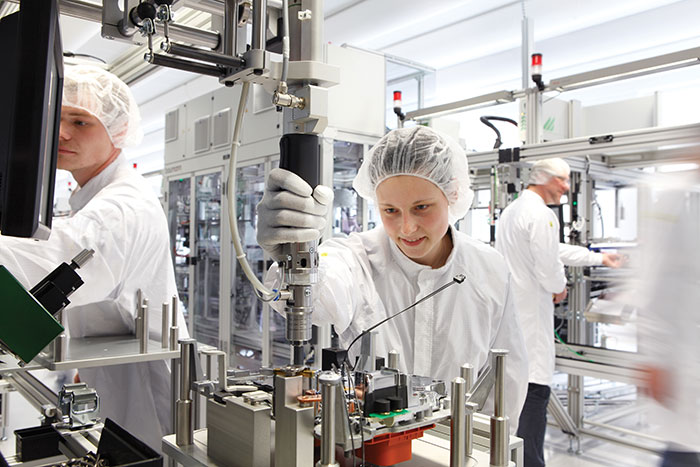 Prior to greenfielding the Silicon Valley site, Zollner had considered “eight to 10” area EMS providers for possible acquisitions, and had come close to buying one, sources told CIRCUITS ASSEMBLY. (The partnership with EIT has since been dissolved.)

Zollner didn’t exactly take the Silicon Valley by storm. “The first two years, we had no real strategy. There was a lot we needed to have to adapt to the area,” Faiyaz Syed, then CEO and president, Americas, told CIRCUITS ASSEMBLY last fall. (He has since left the company.)

Zollner is nothing if not methodical. Its processes, equipment sets and software are replicated at its factories all over the world. A greenfield company by nature, it boasts a global engineering team responsible for equipment selection. That group performs intense design of experiments on every machine prior to allocation. It then negotiates purchases in bulk for the entire world. Decisions are made on an annual basis, although acquisitions might be accelerated if growth dictates.

The storage carousels, of which there are three, are used for stencils and parts. The company estimates they increase the Milpitas footprint by 19 times. Each shelf is configurable by user ID to ensure security of components and materials.

There are exceptions, such as the Takaya flying probe tester, a Dage Ruby XL x-ray for inspecting interposers and package-on-package rework, and an Omron AOI for QFNs, BGAs and through-hole parts. Parmi SPI runs on a closed-loop with the EKRA printers. An Aqueous Technologies Trident batch cleaning system is in place, but inline could be installed as cleaning requirements are on the rise. The site features a Class 10,000 cleanroom where a vaporization chamber is built.

All inventory is internally managed. An internal PLM system operates similar to Agile or Arena, although there are discussions of possibly switching to a third party for greater scalability. SAP is used for shop floor control. Incoming material is color-coded and every fixture has an RFID tag. Readers were present at the beginning of each conveyor. 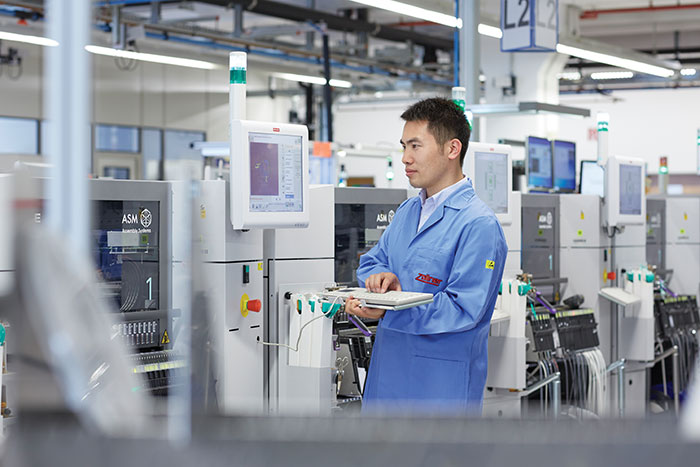 As one might imagine, 50,000-plus sq. ft. is a lot of space for “just” NPI work. Zollner actually performs a heavy dose of testing, including ICT (Agilent i3070), hi-pot test, and functional test using a company-designed system that can be moved anywhere on the shop floor. There is also a dedicated IP room. Box build is impressive. A semiconductor tester that was in progress during CIRCUITS ASSEMBLY'S visit has a 27-level BoM with 4,000 line items. It weighed in at 6,500 lb. and took 40 days to build and two weeks to test. Zollner worked with the customer to redesign and engineer each and every board and piece of sheet metal, noted senior industrial engineer Pavan Buddaraju. Another “one-off” product involved a 6A @2kV board, all plated through-hole with 100% barrel fill. It had four 2-oz. layers of copper and weighed 22 lb.

But the competitive landscape on the West Coast is very different from its other regions, and it took time to hone its skills and processes. To gain traction, the firm leveraged its European customers. “We spent the past few years bringing in our core go-to markets from Germany and fine-tuning it to the quickturn time-to-markets of the Silicon Valley,” Syed said.

Moreover, the disruptive force of the Valley wreaked havoc on Zollner’s traditional markets. Automotive tends to be a very conservative market characterized by long lead times. Medical is similar, with many OEMs choosing to introduce product in Europe while awaiting FDA approval in the US.

Emerging players like Tesla, however, are upending that model. They behave more like cellphone manufacturers, Zollner observed, changing car functionality through software downloads. BMW and others are recognizing the trend, and while still conservative about radical changes, are moving at a much faster rate than before, the company noticed.

To an extent, that plays into Zollner’s sweet spot. Many of its customers are suppliers to the automotive segment, and need more help with engineering than with supply chain management. Zollner aids them by helping automate processes and assembly operations to develop product-test solutions that comply with warranty requirements of a product designed to last several years.

A value recognition board singles out employees for things like honesty, trust, mutual respect – actions that represent the core values of the company.

After Syed departed, Zollner put Stephan Weiss in charge. Business development director Manfred Amberger noted that despite the personnel changes in Milpitas, the goals are still the same: local, low-volume, high-mix assembly that provided a solution to scale in Costa Rica, China and Europe.

As of last fall, Milpitas had a capacity utilization rate in the 30% range and 152 employees. Business development director Brenda Martin noted the company’s “selective” approach, adding that it looks for customers that would fit years from now, not one-off jobs. A few more months have made a difference. Amberger added capacity utilization is now peaking in the “low 80s,” driven by customers wanting highly complex products.

“In the past six months a lot has changed in Milpitas. We’ve added new lines, and now have three SMT: one dedicated for NPI and two for production. We have close to 200 employees and are actively hiring multiple positions.”

On Top in Central America

While North America was slow to stir, Zollner’s efforts in Central America have gone swimmingly. When CIRCUITS ASSEMBLY met with Zollner in September, the Costa Rica plant was easily besting expectations. Opened in Cartago in 2014, with a production area of 42,000 sq. ft., the ramp has gone exceedingly well. Zollner budgeted to add one SMT line there in 2016; instead, it added three, for a total of four. Growth is driven by better-than-expected automotive business, plus demand for medical and industrial electronics.

Says Amberger, “We have a faster ramp than expected. It’s fully up and running. We are considering whether to expand that site. We had to invest in new machines.”

Revenue rose from 1.18 billion euros in 2015 to 1.25 billion in 2016, although in US dollars was flat at $1.33 billion. The company also expanded in Hungary and Romania, as new customers came aboard.

The current business climate for EMS demand is good, the firm says, adding what’s important for Milpitas is building NPIs and quickturn. “What we are seeing, and the market research, is (showing) growth. It’s better than expected,” Amberger said.

In general, the Silicon Valley plant has met Zollner’s goals and expectations, if slowly. Columbus didn’t conquer the New World by himself. “What we have integrated, with systems and trace systems, is locked in now, so we can locally produce mechatronic systems as well as transfer programs to any plant in the world. It’s on a very good path,” Amberger says. Giving up was never an option; Zollner has never closed a factory.

As yet, the Americas remain a small portion of Zollner’s business. The two plants are among the smaller ones in the EMS firm’s stable. The largest, in Zandt, is more than 790,000 sq. ft. It also has more than 100,000 sq. ft. of space across two factories in Romania, and more than 550,000 sq. ft. invested in China. In all, Zollner boasts 10,500 employees across 18 sites in nine countries on four continents.

Still, the firm prides itself on diversification. Automotive and industrial make up 55% of the company’s business. “We don’t serve the 3Cs [computing, communications and consumer electronics]. We do medical, railway, industrial, automotive, test and measurement, and we always try these industries that are stable.” Emphasis on stable. Zollner’s largest customer represents about 6% of the company’s worldwide revenue.

Currently ranked 21st on the CIRCUITS ASSEMBLY Top 50, Zollner remains a pure play EMS company. It offers design and engineering services but performs no ODM work. “We don’t have any of our own product; we are pure EMS,” notes Zollner. “We are a mechatronics service provider, not just PCBA but all the technologies like plastic molding, sheet metal, complete test and engineering.”

Asked whether other locations are under consideration for expansion in 2017, Amberger said, “We are always keeping our eyes open. No expansion in a new region is planned but we are already planning extensions on existing locations.”

There’s no rush. America wasn’t conquered in a day.