Creation Technologies is building a stellar contract assembly model, one acquisition at a time.

Over the course of my 20 years in the industry, I’ve visited well over a hundred electronics assembly plants, and when it comes to today’s SMT operations, the variances are usually subtle – if they exist at all.

Sure, there are almost as many financial models as there are EMS companies, but once we move from the back offices to the factory floor, commonality prevails. A few companies may break the mold, but they are so few and far between, you just stop expecting to be surprised.

Creation Technologies was a surprise, and in more ways than one.

A privately held company, Creation prides itself on being one of the best-kept secrets in EMS today. Shielding itself as it does, however, obscures a long history of performance excellence, and a track record of growth to which few others can compare.

Most mid- and large-tier EMS companies have grown at least in part through acquisition. Creation is no exception, having snapped up, by our count, nine companies in its 21-year history. What’s remarkable is that Creation has never closed a site due to a lack of business. Ever. (They have outgrown a few.) For a large Western-based EMS of its size, that’s unheard of, and speaks well to its due diligence, management and execution.

Moreover, in an era of chasing low-wage manufacturing, 11 of Creation’s 13 factories are in the US or Canada. The company “gets by” with a single site in China and its just-acquired factory in Mexicali, Mexico, the former Aisling Industries.

Another oddity: It’s not unusual for Creation to have multiple sites within earshot of each other. There are two in the Silicon Valley (Santa Clara and Milpitas), two in Burnaby, British Columbia (where Creation got its start in 1991 and is headquartered today), and two in Toronto (Mississauga, Markhem). Moreover, the suburban Milwaukee and suburban Chicago sites are just 60 miles apart. This model of overlap is by design. After a certain point, it would rather add a plant than endlessly expand an existing building. The company prefers facilities of 60,000 to 80,000 sq. ft., with a peak of roughly 350 workers and $75 million to $100 million in revenue. To wit, this year it expanded its site in China and added a 79,085 sq. ft. building in Milpitas after outgrowing its plant in nearby Santa Clara. (The exception would be facilities in low-cost regions, which can be larger.) Business units average three SMT lines, with a range of two to five.

The relative cozy nature of the sites helps keep operations manageable, explains Andy Hyatt, executive vice president – business development & regional leader East and Design Services. Once the Business Unit reaches about 350 workers, it’s time to look to split into a second unit for reasons both cultural and financial. At that point, he says, “We can’t have a town hall meeting with everyone in the same room. We don’t know everyone’s name. Once you reach a certain point, the more difficult it can be for the Leadership Team to pay attention to every customer.”

Creation relies on certain performance metrics to incentivize its employees to remain focused and engaged. Each business unit receives annual performance metrics against which they are monitored and measured. Staff also executes “engagement surveys” in which they are asked to reflect on how Creation is performing toward living its core values, making employees secure, and so on. The results of the surveys are one of six metrics that make up the company’s performance plan. A special sheet hangs where employees can call attention to one another for stellar work. One payoff is consistency; the employee retention rate is 94%.

Through acquisition and execution, Creation grew an average of 20.6% from 2006 to 2011, and at close to $600 million in sales (including the just-acquired Aisling) is now the largest privately held North American-based EMS company and fourth-largest in the world (Table 1). Since June 2007, Creation has been partly owned by Birch Hill Equity Partners, with some 500 employees (including chairman and cofounder Geoff Reed and current CEO Arthur Tymos) owning the rest of the company.

Once a company gets to the size of Creation, it often eschews smaller customers in favor of bigger paydays. To the contrary, Creation insists on maintaining a “smaller is better” mindset that is not reliant on a few large customers. Creation’s top three accounts comprise 10% of its revenue, and top 10 make up 26%. By spreading its risk across roughly 200 customers, Creation is well-positioned to withstand the loss of any given account. This approach makes for a more stable customer-supplier relationship, Creation asserts.

“For smaller customers that engage with a Tier 1 or Tier 2, if  their business doesn’t grow from $3 million or $5 million to $20 million spend in a year, the  larger EMS companies can sometimes under-resource and pay less attention to them, putting their business at risk,” explains Hyatt. “We have found that mindshare is critical for an OEM to have with their EMS provider. Balancing that mindshare and risk – ensuring that the OEM’s spend is not too high or too low – is critical.”

Expansion is never far from management’s mind. Creation has explored sites on the East Coast of the US for years, to the point where it’s actually made offers, according to Circuits Assembly sources, but never consummating a deal. “We’re still looking,” says Hyatt. “And we’ll keep doing that until we find the right company with the right culture in the right location.”

While the large EMS model is to have a couple smaller plants in key geographical locations and big box sites in lower labor cost regions, Creation views the landscape differently. Even the offshore sites are within the standard company footprint. Earlier this year, it moved into a larger facility in Changzhou City, China, which at 75,000 sq. ft. pales in size compared to the megaplants owned by Flextronics, Foxconn and other top tier EMS. When it acquired Aisling Industries in October, the 85,000 sq. ft. factory became Creation’s first south of the border. Creation’s primary markets range from aerospace and defense to medical and industrial, in short, the higher-mix, lower-volume variety, but it would be a stretch to say the company can’t compete in the volume arena. Certain end-products we saw during a plant visit could easily be classified as high-volume consumer items.

Creation has been judiciously adding pre- and after-market services. In 2011, it gobbled up the design and development group of Quest Product Development, bringing to 30 the number of designers it has between sites in Denver and outside Milwaukee. At the time, Tymos lauded the unit’s experience in mechanical design and with medical products.

Unlike most EMS businesses, the designers have their own sites. But while the centers might be discrete, manufacturing and design communicate on a daily basis, Hyatt says, “The design center needs to be a full-scale design center. We want to design full products: PCB layout, mechanical, software, etc. that we ultimately manufacture in a Creation manufacturing Business Unit.”

AMS is another interesting piece, Hyatt says. “It’s a lot like prototyping. A lot of customers need products serviced where they were built because of the fixtures and tooling. A test rack can be $500,000. Customers would rather have the EMS company that has (the fixtures) do it.”

The Creation factory layout is atypical of most. While it follows a cell model that others (Plexus for one) have long since adopted, those cells are based on the customer, not the equipment or the engineering team. So while the Oak Creek, WI, factory, for example, has three common SMT lines (although the equipment set was all over the map: DEK screen printers; Juki, Universal and Fuji placement machines; Heller 1800 EXL and Vitronics-Soltec XPM2 reflow ovens, and an Electrovert Aquastorm 200 for cleaning) located in the center of the 90,000 sq. ft. building, customers have their own cells around the perimeter of the lines. Each cell is labeled with the customer name (dangling by a placard), its own 5S scorecard, customer surveys, and a client history. Most inventory is located at the point of use. Stencils are sited on the factory floor adjacent to the lines.

Each line has an LCD display showing work-in-progress and loading information. The platform is based on a color-coded system, compiled in Access, that all manufacturing staff have access to. A Kanban system tracks inventory on the floor.

Commenting on the unusual layout, Hyatt said, “It’s important for our teams, and we like the visual identity. Anyone can tell at a glance what’s running and what’s not.”

Every Creation factory has conformal coating capability, and in Oak Creek we also saw x-ray, functional test, and an Agilent 3070 ICT. To optimize space, a second story hangs over part of the floor, used for parts storage. A clean room, engineering lab and a dedicated NPI section round out the picture.

Even while expanding the operation in China, Creation has been looking at possible acquisitions in a low-cost region (read: Mexico) in the Western Hemisphere for a few years, writes Tymos, who regularly blogs and tweets. The Aisling acquisition stretches the corporate footprint but takes advantage of the proximity and labor rate advantage of Mexico. Creation is relocating the manufacturing operation to a newer 125,000 sq. ft. facility.

While I haven’t seen any direct indication that OEMs are broadly dissatisfied with China, after a decade of waning US manufacturing, the pendulum is swinging back, and Creation Technologies is in good position to take advantage. “That we’re largely a North American company seems to resonate with customers, especially in this day and age of ‘offshoring and outsourcing,’ ” Hyatt allows.

Creation Technologies is a North American manufacturing success story. But it’s more than that. It is also the CIRCUITS ASSEMBLY EMS Company of the Year. 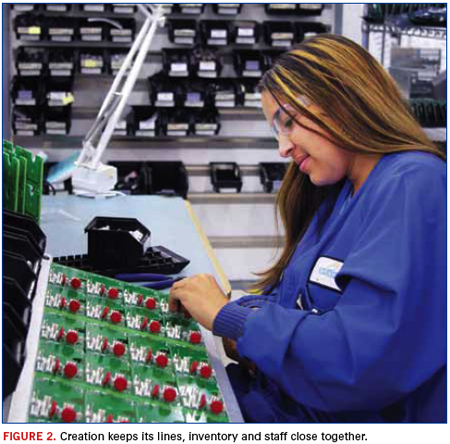