Where the Jobs Are

A Feb. 23 news item from the Associated Press cuts to the heart of the matter when it comes to reshoring of manufacturing and why skeptics (including this humble writer) abound over whether Foxconn and others truly intend to set up large manufacturing plants in the US:

Yet some of the CEOs suggested that there were still plenty of openings for U.S. factory jobs but too few qualified people to fill them. They urged the White House to support vocational training for the high-tech skills that today’s manufacturers increasingly require — a topic Trump has seldom addressed.

“The jobs are there, but the skills are not,” one executive said during meetings with White House officials that preceded a session with the president.

The truth is hundreds of thousands of manufacturing jobs are available in the US today. The US Census Bureau puts the figure at just shy of one million. In talking with circuit board fabricators and assemblers over the years, the biggest impediment to hiring is not lack of work but rather lack of qualified workers.

My belief is the demographics of electronics design and manufacturing resemble a bimodal distribution (two humps), whereby workers over 50 years old represent the largest group by age and workers aged 20 to 30 the second largest. Those aged 30 to 50 are the smallest group (the valley in the graph below). My thesis is workers in that segment were coming online right about the time the North American electronics industry cratered – late 2001 to early 2004, leaving them either out of jobs or unable to crack the then much-smaller workforce that was left after the tech recession. 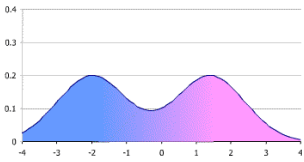 The graph illustrates the basic concept, although in reality the right hump would be higher than the left, as there likely are more workers over 50 than under 30 in electronics design and manufacturing today. But you get the idea.

With the older wave starting to retire, coupled with an upturn in the industry’s fortunes starting around 2008, a new wave of workers has entered the industry. And while we often speak of the lack of millennials in manufacturing, a tour of Silicon Valley area shops takes the air out of that conversation. There, workers don’t ask where the young people are; they just look around. Youth is everywhere. And manufacturers are catering to them, setting up coffee bars (and more) inside their plants, creating workspaces that resemble outdoor atria that offset the traditionally sterile assembly lines.

Moreover, there is some concern that a widespread move of manufacturing back to the US will only accelerate the implementation of robots, leaving thousands of operators on the sidelines. In anticipation, robot makers are ramping capacity, in some cases by as much as two times. This is not without precedent. Those of us who were around when PCB fabrication and assembly migrated to China en masse in the late 1990s/early 2000s recall how common semiautomatic machines were then. It was a nod to the Chinese government, which was adamant about protecting employment.

Must we be careful what we wish for? One tech writer shares the following sign as observed in the Massachusetts Institute of Technology robotics lab: “Be nice to the robots, for they will be in charge one day.”

“Globalization,” he goes on to say, “was once the greatest threat to the middle class. Now it’s automation. And the wreckage is only about to begin.”

What’s your experience? Is your company weighing a return to the US? If so, will it come with an increase in automation? Drop me a line, or weigh in on our Facebook page. And please, no political comments. There are already enough venues for those.