In 1958 Carl F. Carlzen (1916 - 2012) and coinventor Milan Lincoln filed a patent application for a “soldering device,” which, as described, was the first wave soldering machine for printed circuit boards. The idea advanced soldering from dip or fountain (selective) methods into a process that was highly automated and repeatable. They proposed limiting the exposure of the board to heat, as well as methods to minimize bridging or icicles. They were issued USPTO number 2993272 in 1961, and their invention is still used today. Carlzen graduated from the University of Michigan with a degree in Engineering, and spent his career with Sylvania and Lockheed Space and Missile. He was awarded nine patents during his career. 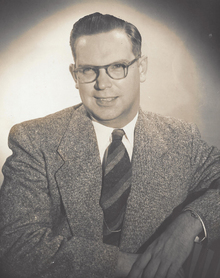