A small New England city is now home to a new ODM plant, but it’s not the typical electronics kind.

Move over Nike: Jabil is jumping into shoe manufacturing, and in a big way.

The EMS/ODM, which has been expanding its focus in recent years to include everything from plastics to supply-chain software, is now leveraging that additional expertise to join one of the most consumer-oriented industries imaginable.

Jabil sees the $55 billion sensory footwear market as ripe for transformation. The emergence of 3D printing, coupled with significant investments in supply-chain tools, is enabling the contract manufacturer to compete in areas many steps ahead of traditional SMT assembly.

There’s little doubt that for upper-tier EMS companies, the markets they serve have transformed significantly of late. But for Jabil to compete in footwear turned on a strategy put in place more than a decade ago. Engineers needed to gain expertise in materials science. Cutting-edge manufacturing methods and supply-chain tools had to be readied for prime time. And automation had to reach the point where it could displace low-cost, high-volume manufacturing regions.

The maturity of additive manufacturing is one enabler. Jabil has been investing in 3D printing for more than 10 years. It has emerged as a core manufacturing process for fixtures and jigs. In May, Jabil was selected by HP to bring its Jet Fusion 3D printer to market. The tool will accelerate the move to “mass customization” while also supporting lower-volume production.

Those are critical components of the footwear business, explains Mike Loparco, CEO of Jabil’s Engineered Solutions Group. “Jabil would like to introduce new forms of manufacturing, new forms of optimizing the supply chain, and new forms of getting products in the hands of consumers.

“Millennials want everything customized, with the features they want, when they want. Automation enables otherwise cost-prohibitive geographies and brings [manufacturing] close to the point of consumption.”

In a phone interview, Loparco told CIRCUITS ASSEMBLY the reality around 3D printing has at long last caught up to the hype. “3D printing is now about 1/50th of the cost” of conventional methods, he said. “It improves cycle time; speeds; tolerances become more achievable. It’s a very real and viable tool.”

3D printing, Jabil says, has reached the point where costs have declined sufficiently to drive adoption, and Jabil plans to become “an absolute leader” in the market, noted Sherri Scribner, an analyst at Deutsche Bank. Indeed, the company expects its revenue from 3D printing to grow 45% compounded annually through 2019.

New investments and capabilities are enhancing supply-chain management so critical to ensuring the fast time-to-market demanded in the consumer world.
Jabil’s proprietary suite of software called InControl looks at a supply chain from end-to-end, evaluates risks and manages them in a real-time manner.

Loparco says sophisticated tools like InControl are necessary to match up with the “sophistication of science” that makes up today’s footwear. “It’s really transformational,” he says. Moreover, Jabil has honed its capabilities in robotics and automation for the volumes necessary to contend with high-volume, low-cost geographies.

The development is the culmination of a strategy put in motion years ago, as Jabil began acquiring companies in a variety of industries far afield from electronics.

“There’s no question we cross-pollinate investment and technologies,” notes Loparco. “Take a step back and look not just at the automotive markets we serve, but the emerging ones. We’ve developed a level of expertise to make these businesses we’ve honed and get into a new one.”

The Blue Sky innovation center (profiled by CIRCUITS ASSEMBLY in December 2015) is also paying dividends. Jabil is leveraging the San Jose-based center to demonstrate the breadth and depth of its expertise to potential customers, while also using the site to educate its workers.

The convergence has led Jabil to open a manufacturing plant in Dover, NH, a small city (population 30,000) on the Piscataqua River, about 65 miles north of Boston and just west of the Atlantic Ocean. Why Dover? Is Jabil simply seeking to capitalize on “Made in America” trends? There’s no question it’s exciting for political reasons.” Loparco says, “but if you look at some of the tariffs and protected industries, there are very real economic reasons” for making footwear in America.

“If you look at the manufacturing regions around the US, footwear has grown up in two locations: Greater Boston [home to Converse and New Balance] and Oregon [Nike]. It’s where the talent is; it’s where the marketing expertise is.”

The company declined to disclose the customers lined up for the new site, other than to say it already has “incredible traction.”

It doesn’t appear Jabil will stop at shoes.

There’s added potential in the high-performance fitness equipment market, which forecasts say will reach $12 billion by 2020. Jabil’s acquisition of Clothing+ gave it a foothold in that space, which is attractive not just because the products align with Jabil’s core capabilities, but the prices customers are willing to pay.

Jabil won’t stop there either, Loparco suggests. Many other industries are ripe for transformation. InControl embodies a suite of different platforms that enable procurement as a service. And Jabil can leverage it for customers for which it doesn’t even manufacture a product.

“You’d be fighting gravity to ignore it. We have the ability to rapidly do prototypes and ramp them to scale. Think of how sophisticated electronics is, the complex global supply chain, and apply that on top of other box-build processes; the innovation is there. And they are asking.” 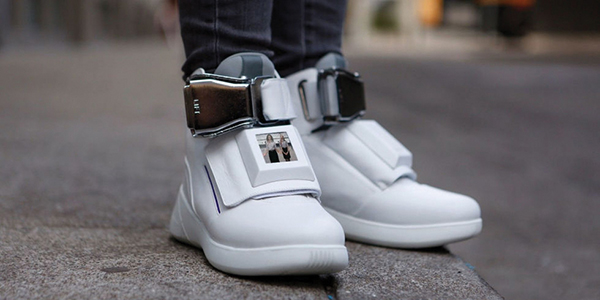 RUNNING GEAR. Are shoes like these in ODMs’ future? (Source: Virgin America)