In this study, a global contract manufacturer received a contract to manufacture Class III devices for a large medical OEM. Since these products are manufactured with no-clean flux, the OEM requested extensive testing, evaluation and validation to confirm that the selected cleaning process is capable of removing all flux residues and thereby ensuring the long-term integrity and reliability required of Class III products.

Based on the OEM’s product requirement, a DoE was developed and executed in two phases. The initial cleaning trials were conducted at the Zestron Technical Center employing spray-in-air cleaning equipment similar to one available at the EMS. Analytical analyses were conducted at Zestron, the EMS and several independent laboratories. Test vehicles used were EMS boards and IPC coupons. All necessary ESD precautions were followed throughout this study.

During Phase 1 of the DoE, visual inspection and ionic contamination analyses were conducted at Zestron as the optimum inline cleaner operating parameters were developed. Once the optimized cleaning parameters were identified, Phase 2 was executed. IC and SEC tests were completed using the EMS boards validating the recommended cleaning parameters identified in Phase 1. The IC test was conducted at a certified laboratory and the SEC test at the EMS location. For Phase 2, SIR and ECM analyses were also conducted at a certified laboratory using IPC test coupons. Finally, compatibility testing was performed with the selected cleaning agent with all critical assembly components and materials.

Following the successful execution of the DoE, the recommended cleaning process was implemented at the OEM site, and the cleaning results were validated.

Table 1. Board Categorization by Paste and Flux Type 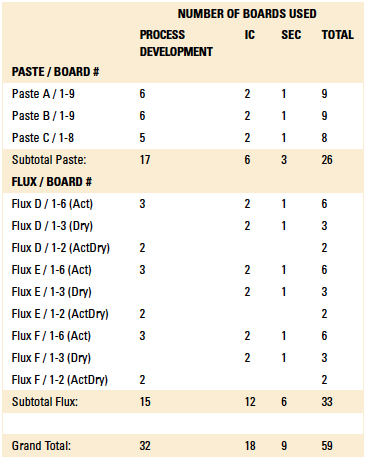 Wave solder fluxes were classified as:

Prior to executing Phase 1 of the DoE, an aqueous cleaning agent was selected on the basis of its ability to solubilize the selected pastes and fluxes, as well as its compatibility with the application cleaning equipment. As a result of this analysis, a micro phase cleaning agent, identified as Cleaning Agent A, was selected for all the cleaning trials within this DoE.

Phase 1: Test protocol. The EMS initially provided 59 test boards for use in the initial DoE. The boards were categorized by paste and flux type. Of these, 32 boards were used to determine optimum wash settings for the inline cleaner, including cleaning agent concentration, wash temperature and wash exposure time. Initial cleanliness assessments were made using visual inspection and ionic contamination analysis.

Visual inspection was conducted according to IPC-A-610E.1 Ionic contamination analysis was conducted using test equipment with a 75% solution IPA in DI-water in accordance with the IPC-TM-650 Method 2.3.25.2 This evaluation was based on J-STD-001E.3

Initial cleaning trials and visual inspection and ionic contamination analyses were conducted at Zestron, since this location had the same cleaning equipment as the contract manufacturer site.

Phase 1: Cleaning process. During the process development trials using the initial 32 boards, the cleaning agent concentration, wash temperature and inline conveyor belt speed were varied and results recorded (Table 2). At the conclusion of each trial with each board type, visual inspection and ionic contamination analyses were performed to assess board cleanliness until the optimum inline cleaner operating parameters were identified. 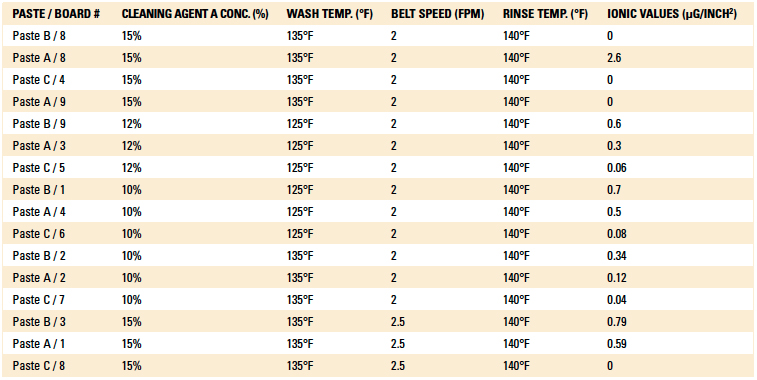 Figure 1. Paste A before cleaning. 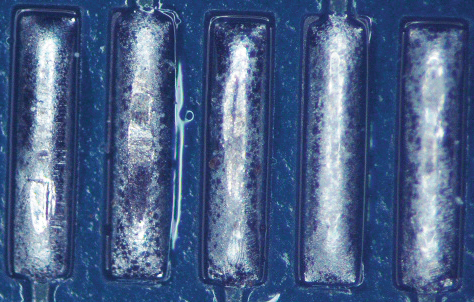 Figure 2. Paste A after cleaning. 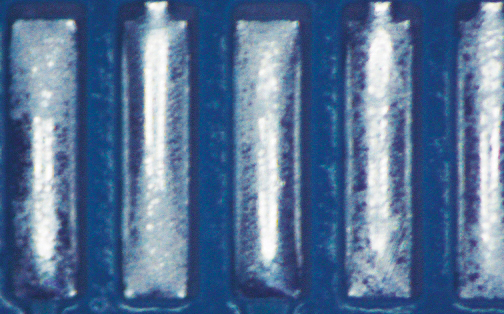 Figure 3. Paste B before cleaning. 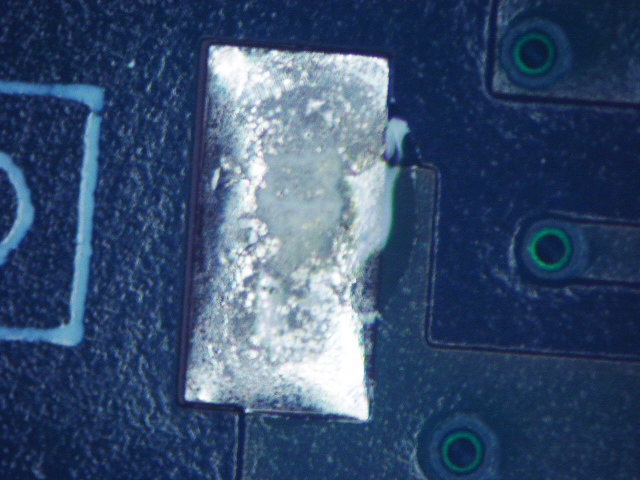 Figure 4. Paste B after cleaning. 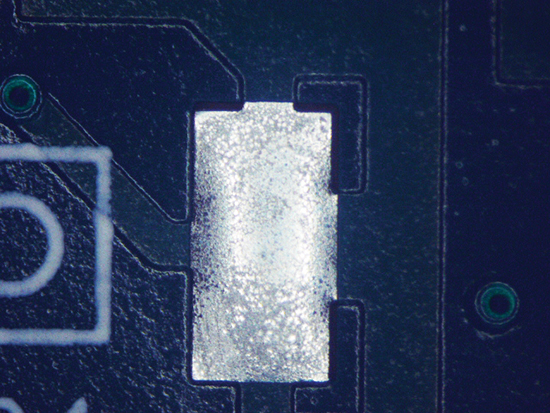 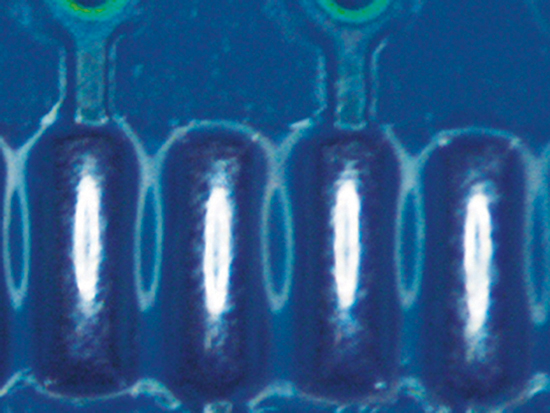 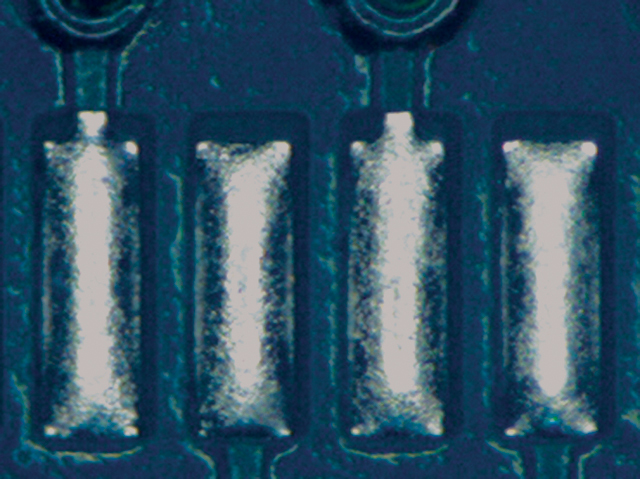 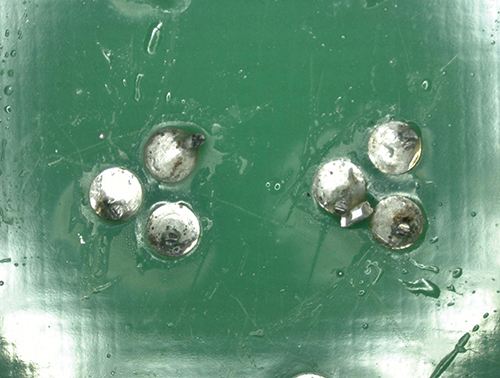 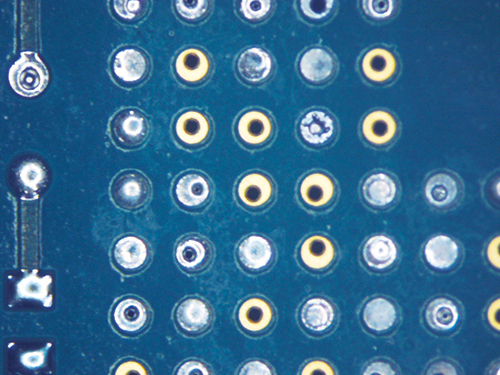 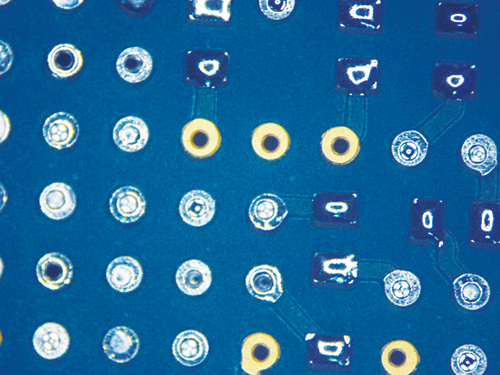 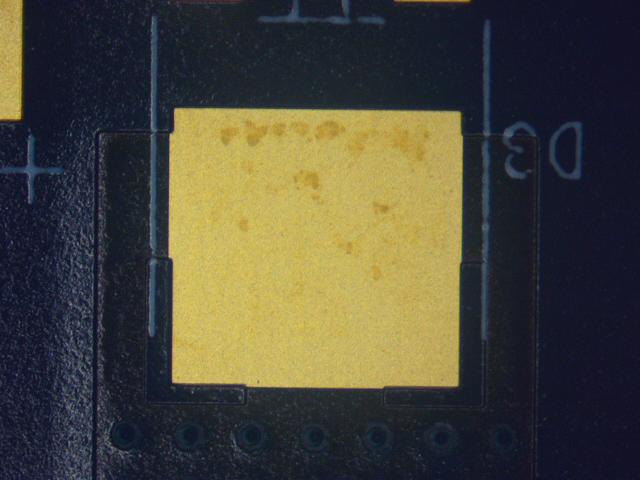 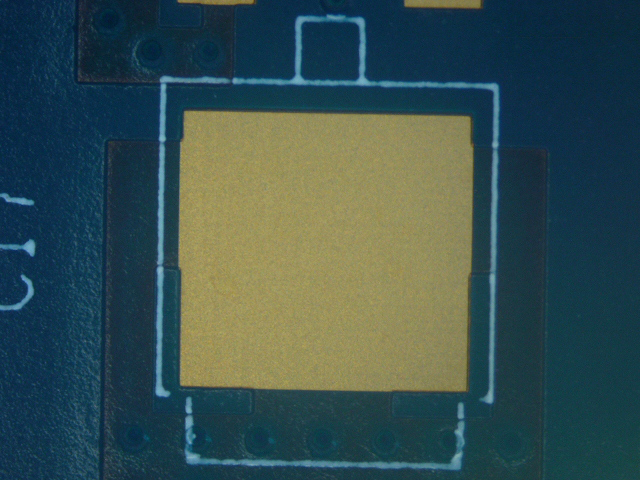 Phase 1: Cleaning process results summary. Through the process development phase of this study, the authors identified the optimum cleaning parameters required to fully remove all post-soldered flux residues. However, since the EMC was seeking a single process condition capable of cleaning all flux residues, the authors used these test data as the basis for the optimum process recommendation. These optimized cleaning process parameters were then employed throughout the remainder of the DoE. These findings are detailed in Table 5. 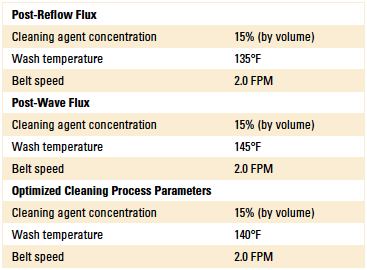 Regarding the SIR and ECM tests, 18 IPC B-24 and nine IPC B-25A test coupons were sourced, incorporating the matrix of paste and flux types required. Additionally, control coupons were included in order to confirm the accuracy of the tests. Excluding the control coupons, all were cleaned using the optimized cleaning parameters identified in Table 5. Once cleaned, all boards were sent to an independent laboratory for analysis. SIR tests were conducted per J-STD-004B4 and IPC-TM-650, Method 2.6.3.70.5 ECM tests were conducted per J-STD-004A6 and IPC-TM-650, Method 2.6.14.1.7

Regarding material compatibility, separate tests were conducted using the EMS label material, as well as a variety of critical components. For label compatibility trials, two label types were evaluated: one used exclusively in the lead-free process and the other in the leaded process. The labels were passed through the inline cleaner five times using Cleaning Agent A (15% concentration) at 140°F and 2.0 ft/min. As part of these trials, the labels were examined for adhesive and ink removal after each inline pass.

Material compatibility testing included short-term and long-term tests. For the short-term test, critical components were subjected to Cleaning Agent A at a concentration of 30% and 140°F for 15 min. in a beaker placed on a hot plate with a magnetic stirrer. Upon inspection following the test, if the part was not compromised, the beaker test was extended to 24 hr. as part of the long-term compatibility testing.

In additional to the beaker tests, the critical components were also passed through the inline cleaner five times with the cleaning agent concentration at 15% and
140°F, yielding a total exposure time of 13 min. The parts were then inspected for dimensional and cosmetic changes. The components subjected to material compatibility testing are detailed in Table 6. Separate material compatibility tests were conducted using the EMC label material, as well as a variety of critical components.

Phase 2: Ion chromatography results. For this test, 18 EMS boards as referenced in Table 1 were cleaned using the optimized parameters detailed in Table 5 and sent to an independent analytical laboratory for analysis.

The boards were divided into three groups consisting of six samples each. These were activated flux samples, dried flux samples and solder paste samples. Ion chromatography testing was conducted per IPC-TM-650, Method 2.3.28A.8 Results are detailed in Tables 7, 8 and 9. 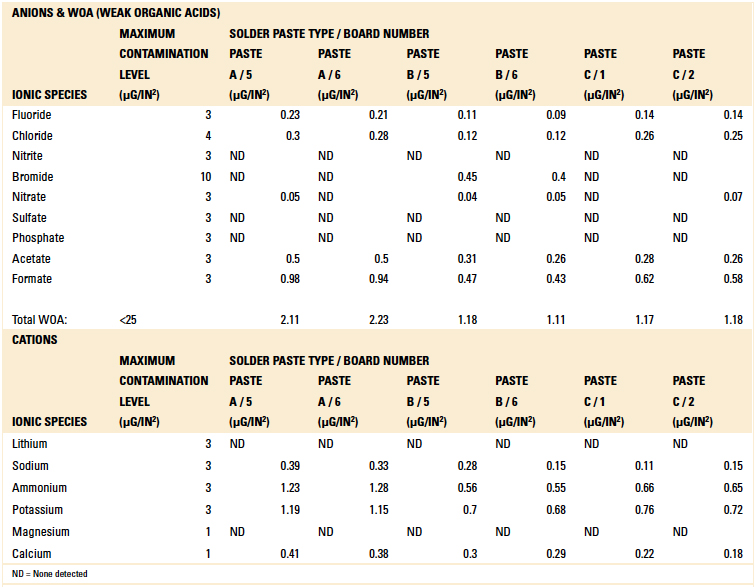 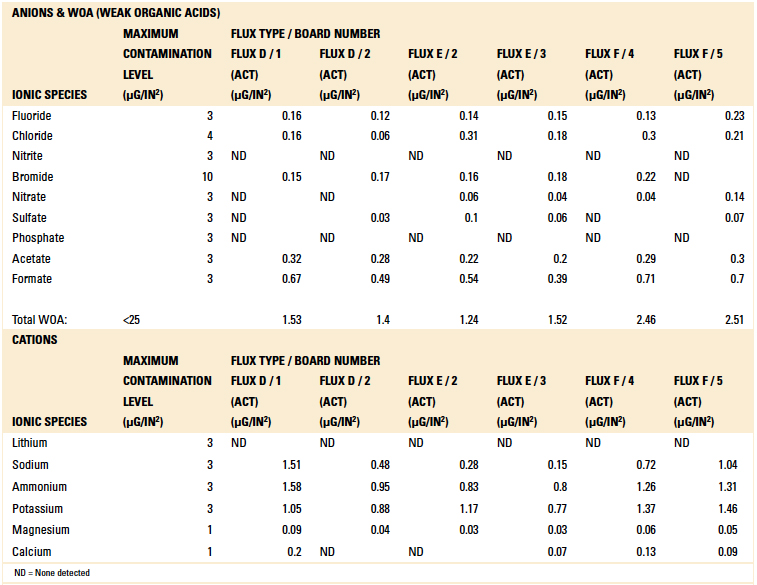 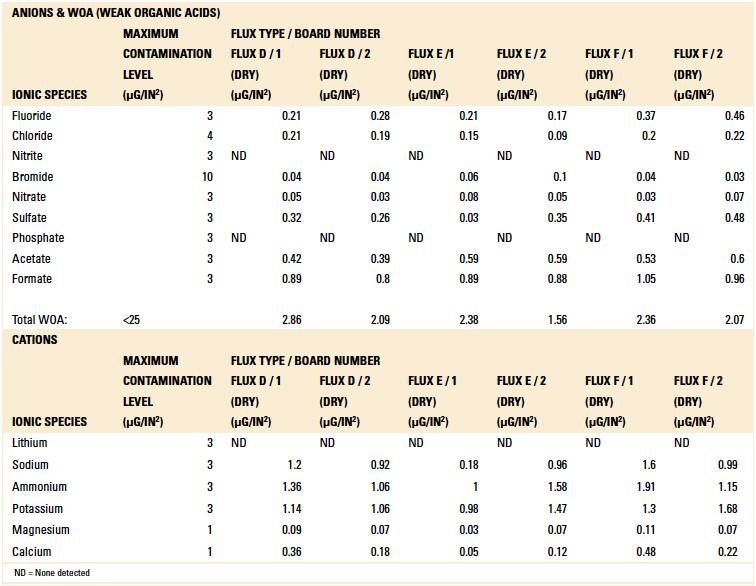 Based on the authors’ experience with this test methodology, the maximum contamination level for all ionic species is indicated within each table. As can be seen, the contamination level determined in all tests was found to be well below the acceptable limit. 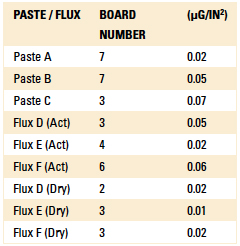 All values obtained from the SEC tests as well as ion chromatography were well below the specifications set forth by the EMS. 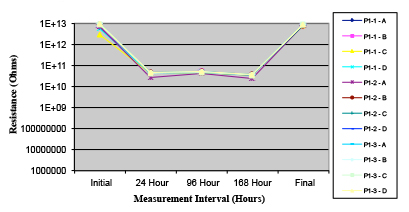 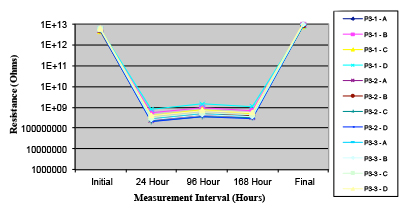 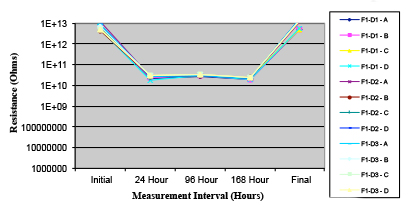 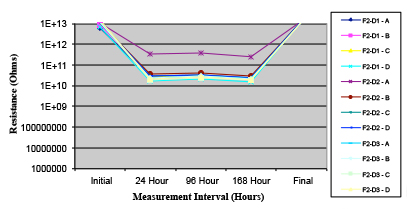 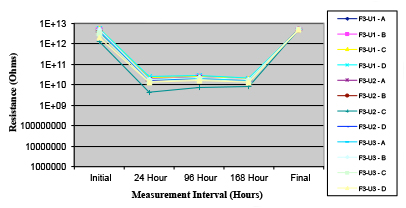 Phase 2: Compatibility results. The lead-free label was found completely compatible with the cleaning agent under all test conditions. However, the top coat of the leaded label included a varnish base and began to peel during the inline wash process. The top coat was completely removed from the label at the conclusion of the inline trials. The authors recommended the label supplier use the same top coat for the leaded label as used for the lead-free label. The new labels were reexamined and met the EMS’s specifications.

Figures 31 and 32 represent the control label that is currently used by the EMS for the lead-free process. This label was baked by passing three times through a reflow oven prior to conducting the compatibility trials. 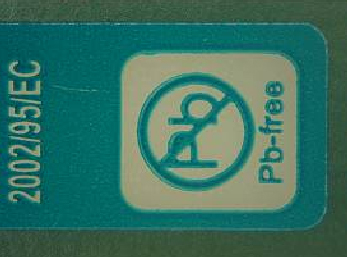 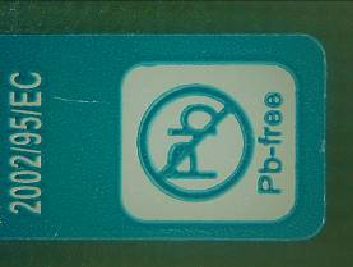 Figures 33 and 34 represent the label used in the leaded process which included a varnish coating. This label was also baked by passing three times through a reflow oven prior to conducting the compatibility trials. 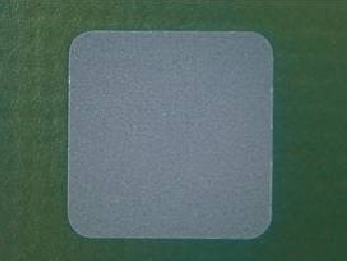 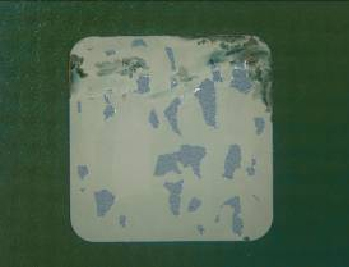 No significant changes were observed with regard to the material compatibility of the components. All materials were found to be intact with no swelling, brittleness, or cracks when exposed to the cleaning process for a prolonged period.

Tables 11 and 12 detail the results of both the short term (15 min. of continuous exposure to Cleaning Agent A) and long term (24 hr. of continuous exposure to Cleaning Agent A) exposure testing. However, the color of the wire harness changed color from purple to grey during the 24 hr. test. This would never be the case in a production environment, since these components could not be continuously exposed to a cleaning agent for 24 consecutive hours. Both the EMS and OEM confirmed these test results.

Using the EMS’s boards, paste and flux details, a DoE was developed enabling Zestron to select the most suitable cleaning agent and implement a testing program with cleaning equipment similar to that used by the EMS. Cleaning equipment parameters were optimized and excellent cleaning results were obtained, as indicated by visual inspection and ionic contamination analyses. The cleaning process efficiency was verified using EMS boards through Ion Chromatography and SEC analyses. Finally, additional verification regarding the effectiveness of the cleaning process was obtained through the use of SIR and ECM analyses employing IPC test coupons.

Once both the OEM and EMC were assured that the recommended cleaning process met their Class III cleanliness requirements, material and component compatibility testing was conducted. Critical board components were found to be completely compatible; however, the label supplier was required to make a top coat change on one of the two labels used.

Based on the results of this DoE, the cleaning process was implemented at the EMS site, and cleaning results were subsequently validated as meeting the OEM cleanliness specifications.

Ed.: This article was originally published in the IPC Apex Proceedings, February 2013 and is reprinted here with permission of the authors.