Experimental data reveal a strong correlation between SPI and AXI.

Because SPI and AOI were situated in front of AXI in the production line, it was efficient to use SPI and AOI to detect defects at an early stage. With SPI or AOI, it was possible to reduce AXI coverage while maintaining maximum testing coverage. To make the test method more effective, correlation studies with experiments were performed. We expected to see correlations between SPI-AOI, SPI-AXI, and AOI-AXI. To have more defect types and pins on the test boards, various stencil aperture percentages were used to ensure various defects for select components. The results showed good correlation between the testers, except for some defective pins at acceptable boundary condition levels. The data also indicate SPI volumes’ threshold that we need to adjust below 60%. The results are helpful for refining SPI, AOI and AXI programs.

The two AXI machines (AXIA and AXIB) studied were able to detect more than 90% defects for assemblies; however, image quality improvements are needed on the AXIB machine for critical packages such as PTHs or QFNs with insufficient solder.

Methodology. A laser-cut, 0.125mm thick stencil was used with Indium SMQ92J Type 3 solder paste. The solder was SnPb with a metal load of 90.25%, and the reflow peak temperature was 227.3oC.

Eq. 1 is a calculation method of CI:

Table 1 shows data from the three assemblies for board size, total number of components and solder joints. Eq. 1 was used to calculate CI (Table 2). Based on the CI definition, assemblies #1 and #2 are medium complexity board, and assembly #3 is low complexity board.

Thirty boards for assembly #1 and #2 (medium complexity) and 22 boards for assembly #3 (low complexity) were tested at AOI, ICT1, AXIA, AXIB and ICT2. (AOI is Agilent SJ50 and ICT is Agilent 3070.) Boards were tested on the Agilent 3070 twice (ICT1, ICT2): ICT1 was used for testing ICT capabilities; real defective pins were not repaired until ICT2. All defective pins were recorded at each testing station. Test defect detection from each machine was compared, and the undetectable number of boards and pins on different machines and with different combined machines with three assemblies listed.

Correlation study. The experiment was done on assembly #1 (medium complexity). The board size is 265 x 175.5mm and 1.6mm thick with eight layers. Table 3 lists the main component information. 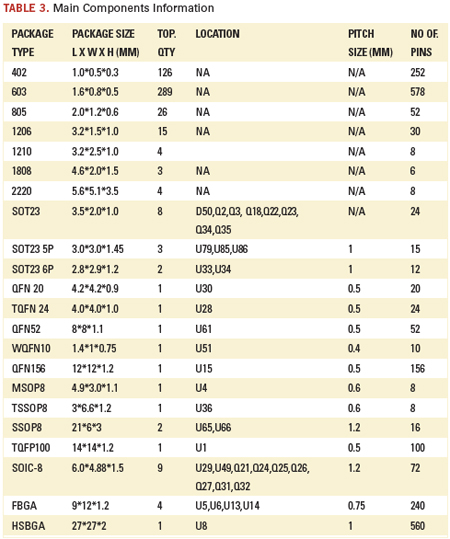 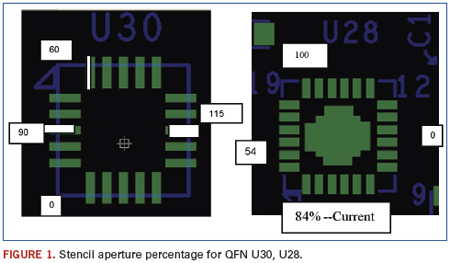 Machines’ capability study. Test data came directly from the SMT manufacturing line. The total real defects number was 43, 27 and 0 for Assembly #1, #2 and #3, respectively. The tester detection percentage is different with different complex assemblies. Table 4 lists different testing methods to analyze data for medium #1, medium #2 and low complex boards – the same method for all the boards. Defective pins and boards escaped are listed for different test methods. No escapes were observed with AOI and AXI combination testing for medium-complexity assemblies. Figure 2 shows the test method versus undetectable percentage. It appears AOI and AXI can cover ICT detection for these two assemblies. For low-complexity assembly, there were zero defects. Based on the data, AOI shows good defect detection (35% - 37% of total defects) for both medium assemblies. ICT shows better detection (48% of total defects) for Assembly #2. 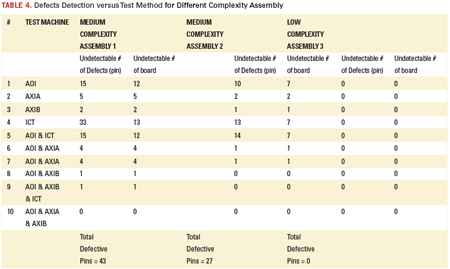 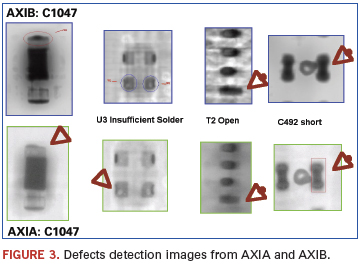 The Complexity Index is 74.26, 52.66 and 1.35 for assembly number #1, #2 and #3 respectively. The defects per million opportunities2 (DPMO) is 4292, 2388 and 0 for the assemblies based on total real defects numbers of 43, 27 and 0, respectively. The larger the CI is, the larger the DPMO is (Figure 4). (The authors plan to have more data points for DPMO vs. Complexity Index on the graph, and expect DPMO with CI number for new products. This means we may predict DPMO for a new assembly if we have more data points for the graph.) 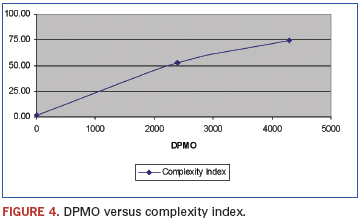 As mentioned, there were three case studies. The testing time of three assemblies for test machine versus case study is listed in Table 6. The AXI testing time can be significantly reduced, with Cases # 2 and #3 showing reduced percentages for duplicated testing coverage. However, there was little change of Duplicated Testing Percentage between Case #2 and #3, but we are much more confident with the escapes per the Case #3 method because we tested all defective locations (component/pin), which were shown for the past several months from our production SMT lines. 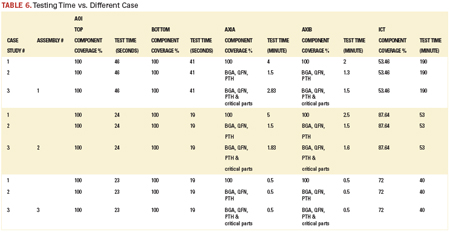 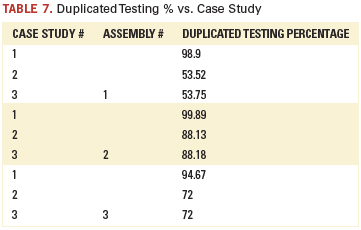 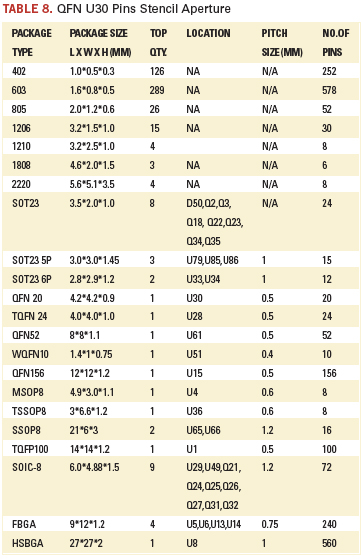 The correlation results of SPI-AOI, SPI-AXIA, SPI-AXIB, and AXIA-AXIB are shown in Tables 9 to 12, respectively. The component location, package type, pitch size, and total number of pins are listed in the first, second, third and fourth column of each table. F-F, F-P, P-F, and P-P stand for Fail-Fail, Fail-Pass, Pass-Fail, and Pass-Pass for two machines’ attribute results: Fail-Fail and Pass-Pass mean two machines have the same testing results, and Fail-Pass means the first machine testing data failed for the pin, and the other machine passed the same pin. 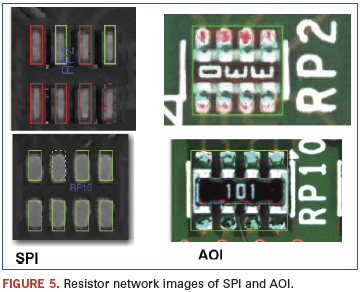 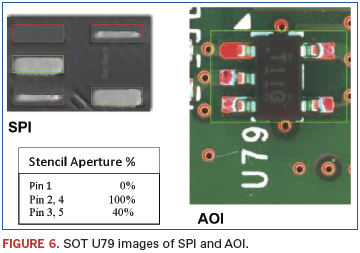 In Table 10 and 11, we have good correlation for SPI-AXIA and SPI-AXIB for most packages, except for BGA U14 and resistor network components RP 1-3. BGA U14 has 60 pins with 0.8mm pitch size. The stencil aperture is 33% and 81% as CAD data (pad size). Figure 7 listed its images for SPI, AXIA, and AXIB. SPI failed all pins, both with 33% (pin on right side) and 81% (pin on left side) stencil apertures due to solder volume less than 60%. Both AXIA and AXIB passed pins with stencil aperture of 81%, and AXIB passed extra two pins (orange color arrow) with 33%. 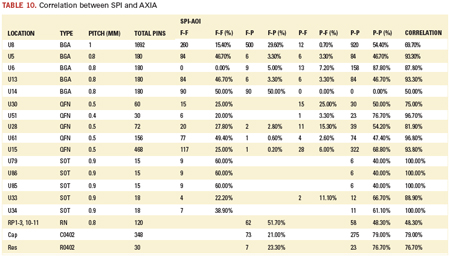 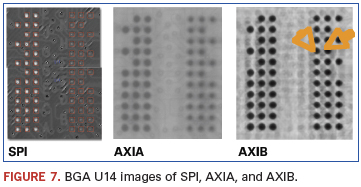 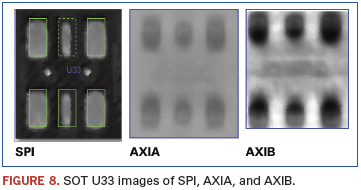 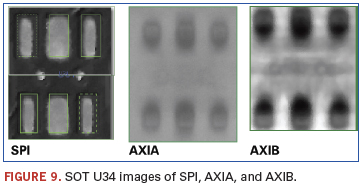 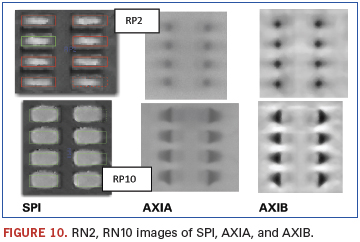 The data show good correlation between SPI-AOI, SPI-AXIA, SPI-AXIB and AXIA-AXIB, except for some pins with stencil aperture for boundary solder quality. The result is good information for optimized SPI, AOI, AXI programming threshold settings. 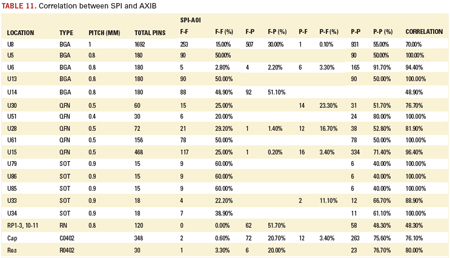 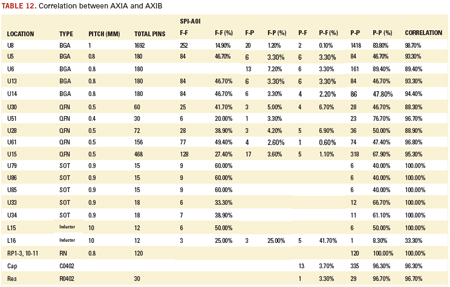 1. There is room to reduce testing coverage by studying detectable defects and testing yield from testing machines.
2. Test strategy (method) depends on board complexity, tester capabilities and product yields.
3. Test optimization is the best balance between no potential escapes and minimum test coverage.
4. A DPMO prediction can be made for a new assembly program when there are more data points on the graph (DPMO vs. Complexity Index).
5. AXIA and AXIB correlated very well with their testing data. They showed the same level of defect detection performance in the SMT lines.
6. It is possible to reduce AOI testing with SPI; it is also good to reduce AXI by using SPI and AOI. The experimental data show very good correlations between SPI and AXIA, and SPI and AXIB.
7. There are potential time savings for SPI, AOI and AXI programming with the correlation data/results to change SPI, AOI and AXI threshold settings.

Ed.: This article was first presented at IPC Apex in April 2011 and is reprinted here with permission of the authors.