Could a mix of finishes hold up after 20 years in storage?

Spare test specimens with the investigation surface finishes were produced for the study but were not utilized during testing. These specimens were placed in non-sealed polyethylene bags, stored in a 21ºC/30%-65% RH environment and promptly forgotten. The specimens were rediscovered in 2015 after accumulating 20 years of total storage time, thereby providing an opportunity to investigate extreme long-term solderability of a well-characterized set of surface finishes.

Test specimen. The test specimen was a bismaleimidc-triazine (BT) laminate, 0.040" thick with 0.5 oz. copper outer layers sheared into 3" x 3" squares. These 3" x 3" substrates were electroplated with approximately 0.001" of copper prior to the application of each specific test surface finish. The test substrates that contained a nickel layer had approximately 0.0001" to 0.0002" of electroless nickel plating deposited. The 3" x 3" test substrates were diamond cut into six sections approximately 0.5" wide after plating for use in the 1995-96 evaluation. A total of three to five spare specimens that were 20-years-old of each surface finish were available for the new solderability investigation.

Test plan. A sample from each of the surface finishes and thicknesses was initially tested using a Metronelec ST88 wetting balance, following the protocol detailed in IPC J-STD-003C-WAM1. These samples were tested using eutectic SnPb solder and using the prescribed test flux #1. The test temperature was 235°C with a dwell time of 10 sec. in the solder pot. Only two sample groups failed to produce positive wetting forces:  the single thickness sample of immersion bismuth and the 3µin palladium over copper sample. Based on these initial screening results, additional samples were cut at random from the sample strips and were tested using the same test protocols. A number of selected samples were assessed using focused ion beam (FIB) microscopy. An FEI Quanta 200-3D dual beam system with a gallium target ablation source and a maximum ablation rate of 0.5µm/min. was used. A layer of platinum was vapor-deposited on the test samples prior to FIB analysis to prevent extraneous ablation damage. Sample assessment was also conducted using a Fischer Technologies XDV-SDD x-ray fluorescence (XRF) system. 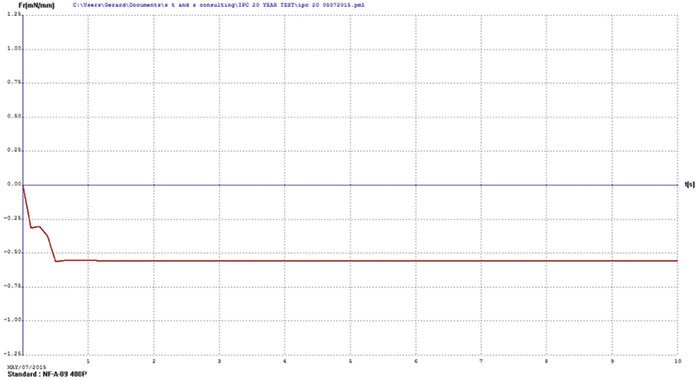 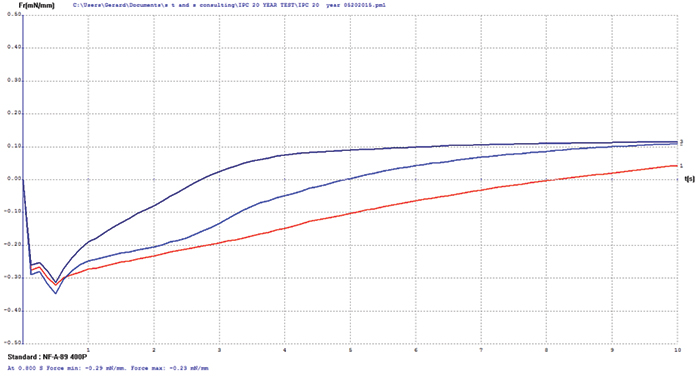 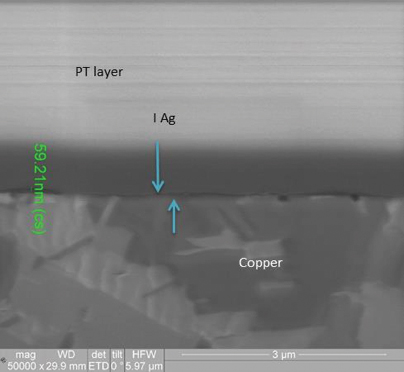 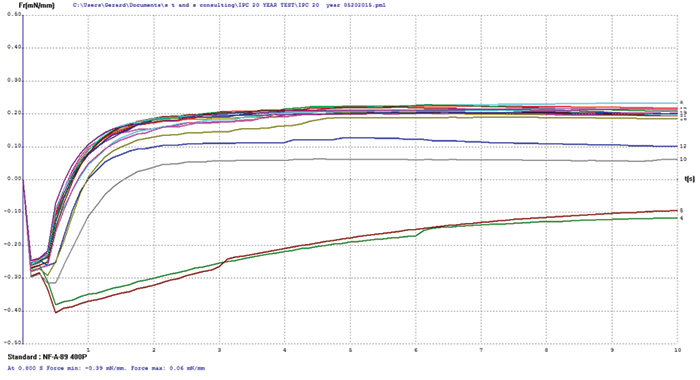 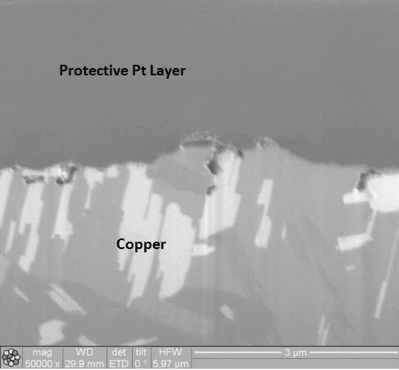 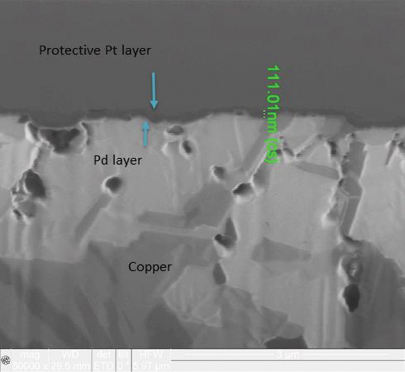 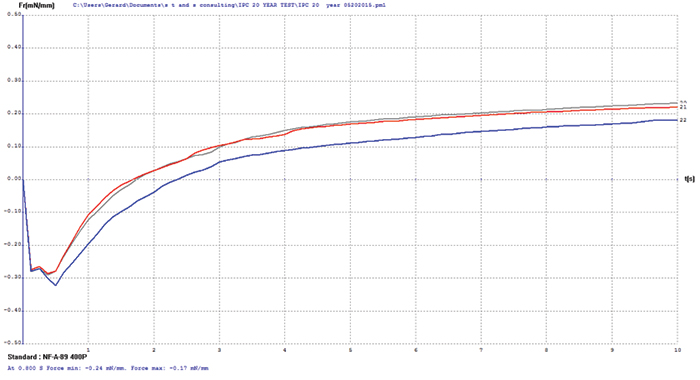 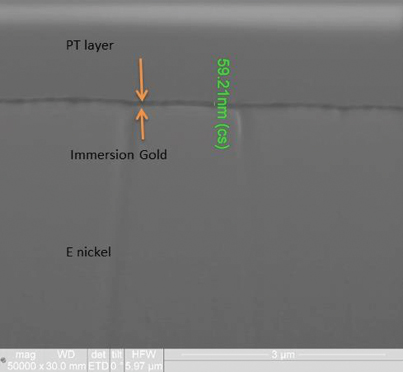 Electroless nickel/electroless palladium. FIGURE 9 shows wetting balance test data for electroless nickel/electroless palladium. Overall this group exhibited excellent robustness, with the majority wetting in less than 1 sec. The rates of rise are good, which indicated the presence of only a minor oxide layer that was easily reduced by the rather inactive test flux #1. The spread in the final wetting forces is relatively small, with final forces somewhat lower than ENIPIG surface finish, but excellent overall given the age of the samples. 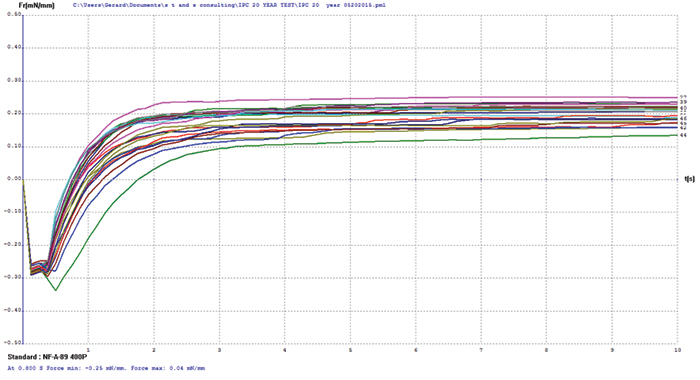 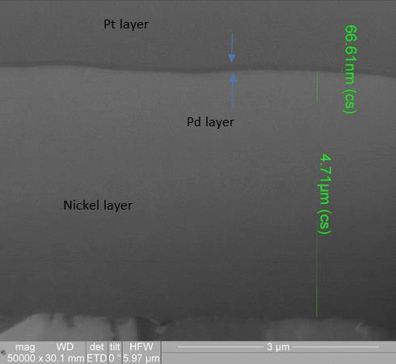 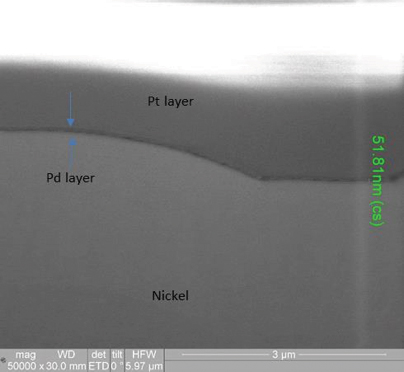 Electroless nickel/immersion palladium/immersion gold (ENIPIG). FIGURE 12 shows wetting balance test results for the ENIPIG surface finish. Use of immersion gold over the immersion palladium dramatically improved the robustness of the deposit. Wetting times were excellent at under 0.5 sec, even after 20 years of storage. The rates of rise are also excellent to a final wetting force that meets the current requirements of IPC-4556. FIB and XRF assessment were not conducted on the ENIPIG surface finish due to sample quantity constraints. 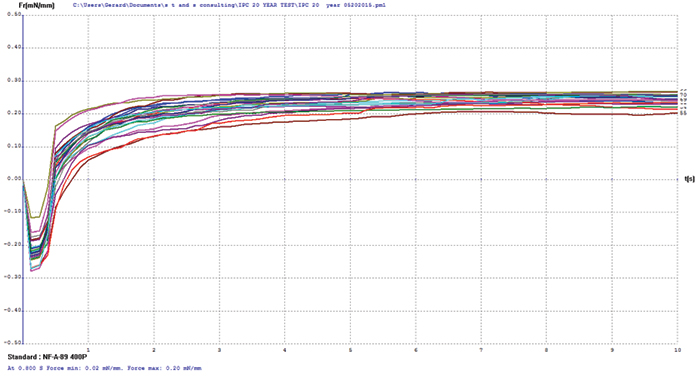 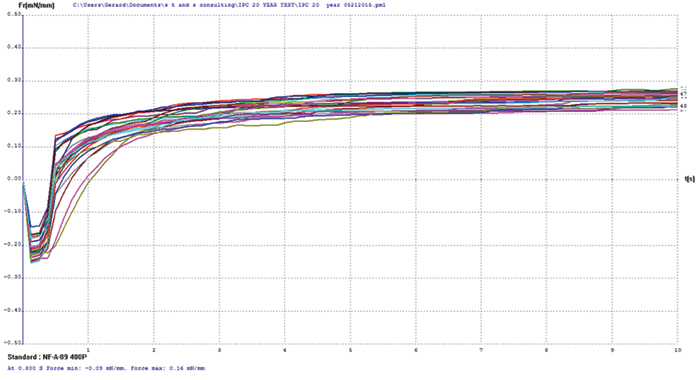 Copper/electroless nickel/electrolytic gold. FIGURE 14 shows wetting balance test results for the electroless nickel/electrolytic gold surface finish. The thinnest nominal gold deposit was 5µin. The consistency of the group is excellent, with the majority producing positive wetting forces in less than 1 sec. The rates of rise to the final wetting forces are similarly excellent, indicating the gold layer has protected the underlying nickel from passivation. 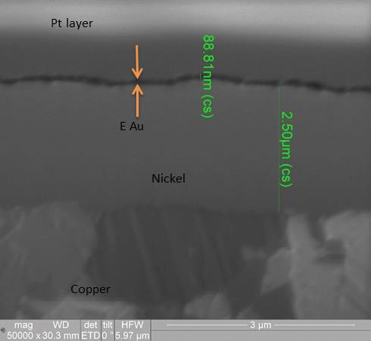 Acknowledgments
The authors would like to thank Hank Lajoie and Lisa Gamza of MacDermid Enthone Electronic Solutions for outstanding focused ion beam (FIB) microscopy/XRF analysis, and Ross Wilcoxon, Rockwell Collins, for his scathing review of the manuscript.

Ed.: This article was first published in the SMTA International Conference on Soldering and Reliability Proceedings and is reprinted here with author permission.