Competitive Analysis of Parylene Coatings Based on Metrology

The quality and performance of four Parylene C coatings were compared. Two additional companies were approached, committed, and then declined to participate in the project.

From the providers that chose to participate, thickness targets of 2 and 7µm were requested, as well as a request to not use an adhesion promoter.

Coupons were provided as 4" and 8" silicon wafers, as well as 4" copper disks. The coatings were examined with the following types of metrology:

In this study, comparisons were difficult due to some of the providers not following proper instructions when depositing coatings on the samples. Examples included coating the wrong side of samples, coating at the wrong thickness, and the use of adhesion promoters. Even when sample runs had to be repeated, a few of the issues still occurred. The most egregious was Company C, with the results noted in each section.

Coating adhesion was evaluated on four silicon wafers using the cross-cut test method. The cross-cut test assesses the resistance of coatings to separation from substrates when a right-angle lattice pattern is cut into the coating, penetrating through to the substrate. After cutting, a brush pen is brushed over the lattice in a diagonal direction five times, or tape is placed over the cut and removed with Permacel tape. The final step in the method is evaluating the grid with an illuminated magnifier or microscope to determine how much of the coating has flaked from the edges of the lattice cuts. Depending on the amount of material remaining, the sample is rated on a scale from 0B to 5B, where 5B is the best result.1

TABLE 1 shows results of the testing, and FIGURE 1 shows images of highlighted samples. Note that Company B samples used an adhesion promoter, which helped ensure a strong result. The reason behind the poor performance of the Company C and the Company A 9.3µm sample is unknown, but is likely some form of surface contamination introduced through the handling process. 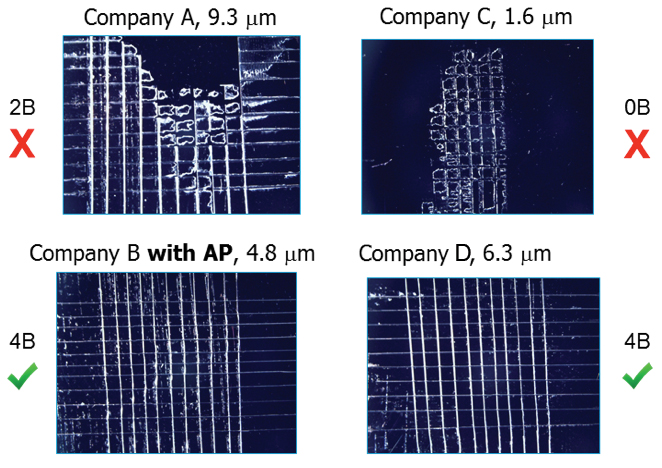 Salt fog testing followed a procedure from ASTM B117-07, where the chamber was raised to 35°C, and a salt fog, consisting of five parts by weight sodium chloride and 95 parts by weight water, was introduced into the chamber and permitted to contact the samples for 168 hr. (seven days).

FIGURE 2 shows an example of uncoated and Company D coated IPC-B-25A D coupons evaluated by Trace Laboratories in early 2014. The uncoated sample showed severe corrosion, while the Company D coated sample showed no corrosion and only minor discoloration. The discoloration was due to oxygen penetrating the coating and reacting with the copper to form copper oxide. The green corrosion products on the uncoated sample are copper chloride due to copper reacting with chloride from the salt fog. 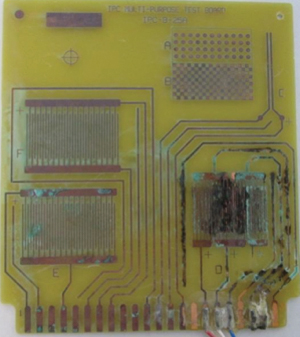 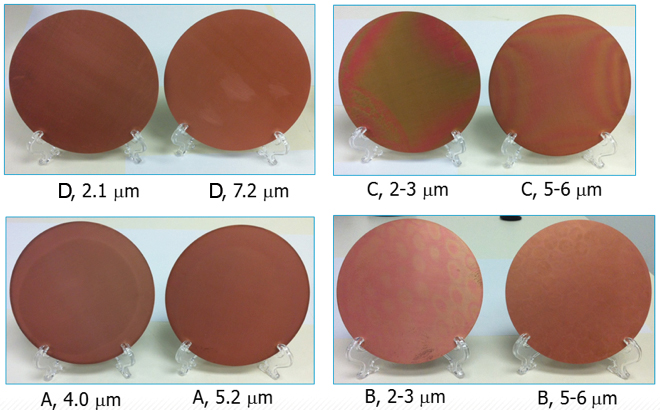 Figure 3. Images of the coated copper disks prior to being placed in the salt fog chamber.

Birefringence is the double refraction of light in a transparent, molecularly ordered material, which is generated by orientation-dependent differences in refractive index.2 These differences in refractive index for Parylene C films are affected by deposition temperature and, in turn, by degree of crystallization. The degree of crystallization in polymers describes the partial alignment of the polymer’s molecular chains. Since the degree of crystallinity is affected by deposition temperature, as well as internal and external stresses, it is best to control the thermal history and stress states3 of the films in future comparisons. 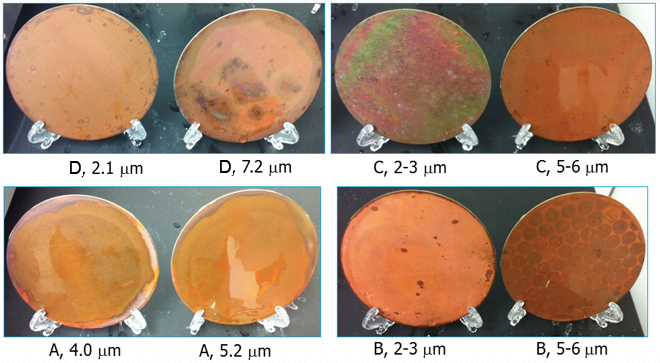 Figure 4. Images of the coated copper disks after being exposed to salt fog for 168 hours.

ImageJ4 was used for image analysis on the Company C 2-3µm and the Company D 2.1µm samples for comparison and quantification of corrosion protection performance. The Analyze Particles function was used with the results summarized in TABLE 2. The Company C sample had more than 10 times the particles, and those particles occupied just over six times the amount of area when compared to the Company D sample.

FIGURE 5 shows another set of Company D coated copper disks that were exposed to 264 hr. (11 days) of salt fog with no evidence of corrosion. Again, the discoloration was due to oxygen penetrating the film, but moisture was blocked.

Figure 5. New samples of Parylene C coated copper disks, 7 microns thick, which were exposed to 11 days of salt fog with no evidence of corrosion.

Additional coated copper disk samples that weren’t exposed to salt fog were immersed in 10% nitric acid for 30 min. FIGURE 6 shows a Company D 2.1µm sample with no evidence of corrosion. FIGURE 7 shows a Company C 2-3µm sample that has marks resembling scratches all across the surface of the disk. Note that while the Company C sample was immersed, bubbles were observed on this sample, indicating that nitric acid was reacting with exposed copper. 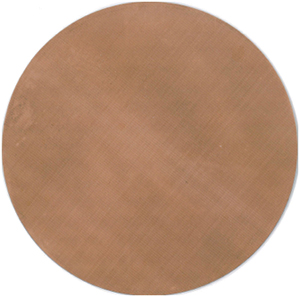 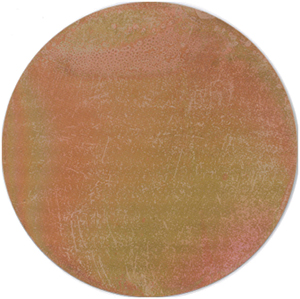 Surface roughness was determined for the samples using atomic force microscopy (AFM) in the Micron Microscopy Suite at the University of Utah. Measurements were captured over 1 x 1 and 10 x 10µm areas on all of the samples, with measurements repeated for an additional two Company D coated samples over a 10 x 10µm area. Data for these measurements are shown in TABLE 3.

Table 3. Surface Roughness Determined by AFM for All Coatings 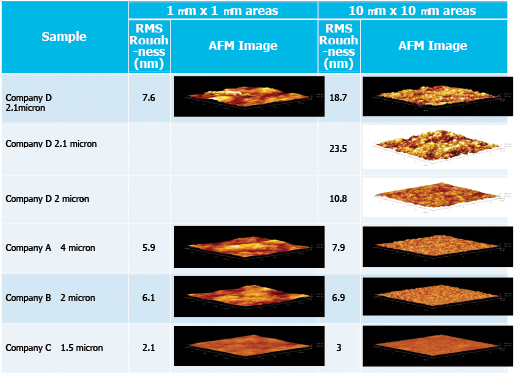 The high surface roughness may actually have other benefits in the area of LED encapsulation.  In an article by Fujia Zhang et al.,5 surface roughness was affected by deposition rate with 2 µm/h resulting in 15nm valley to peak and 5.6µm/h resulting in 50nm valley to peak. The surface roughness affected LED output performance parameters. In the same article, they note that the light output from a surface with nano-rough morphology is enhanced by reducing the total reflection effect, enhanced light extraction from the silicone encapsulation of LEDs with an island-like morphology surface. In addition, by examining the radiation patterns, LEDs show stronger light extraction with a wider view[ing] angle. These results offer promising potential to enhance light output powers of commercial light-emitting devices by using parylene C layer under suitable island-like morphology nano-rough surface.

Zhang et al. also stated that higher rates of deposition lead to poorer quality films, but that hasn’t been seen by the authors. Company D’s roughest film though was 23.5nm valley to peak, which was less than half of the 50nm valley to peak observed by the investigators.

Contact angles for coated samples were measured using a Ramé-Hart Instrument Company Model 190 Contact Angle Goniometer and distilled water. A contact angle is formed between the solid/liquid interface and the liquid/vapor interface produced from a drop of a liquid on a solid.

In general, as roughness of a surface increases, the contact angle in a Wenzel state will generally increase on hydrophobic surfaces and decrease on hydrophilic surfaces.7 In a Wenzel state, the liquid from a drop fills the voids below the liquid and thus occupies more surface area. In a Cassie (a.k.a. Cassie-Baxter) state, the drop rests upon the asperities with gas left in the voids below the drop. The surface area is less than it would be for a drop of the same volume and apparent contact angle on a flat or rough surface in a Wenzel state.8 Figure 8 shows the difference between Cassie and Wenzel states.

Figure 8. Diagram showing the difference between Cassie vs. Wenzel states.

Based on the information above regarding increased roughness, as well as the surface roughness data, the Company D sample would have been expected to increase contact angle. The suspected reason for the decreased contact angle was increased oxygen content at the surface of the Company D coating from process termination by venting to atmosphere, where oxygen terminates free radicals of the Parylene polymer chain and leaves an oxygenated functional group, such as hydroxyl (-OH), that decreases contact angle, increases hydrophilicity, and decreases hydrophobicity. More details on this subject will be provided in a future article.

Evans Analytical Group performed x-ray diffraction (XRD) to determine the percent crystallinity of the coatings on silicon wafers. Wafers were mounted directly onto the diffractometer with clips. XRD data were acquired by grazing incidence XRD (GIXRD) on a PANalytical X’Pert Pro MRD diffractometer equipped with a copper x-ray tube and parallel-beam optics. The incidence angle was fixed at 0.3˚.

FIGURE 9 compares the data from all four samples. Superimposed on the patterns is the ICDD/ICSD (International Center for Diffraction Data/Inorganic Crystal Structure Database) diffraction reference pattern for polycrystalline silicon. There is almost no difference in these samples. 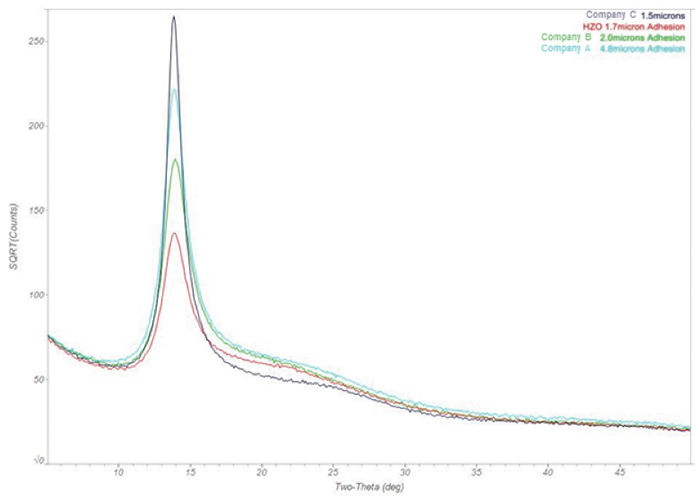 Figure 9. Comparison of GIXRD data from all four samples. Data from EAG.

TABLE 5 provides the percent crystallinity of each of the four Parylene C coating samples. D was found to be 40% crystalline, the lowest of the four, which was likely a characteristic of the deposition process. Again, since D’s rate of deposition is considerably faster than other known Parylene providers, the polymer isn’t afforded time to organize and align, becoming less amorphous and more crystalline.

Samples from Company C couldn’t be tested for tensile strength, since they were deposited either too thin or with an adhesion promoter. Therefore, the films were unable to be removed from their respective silicon wafers. 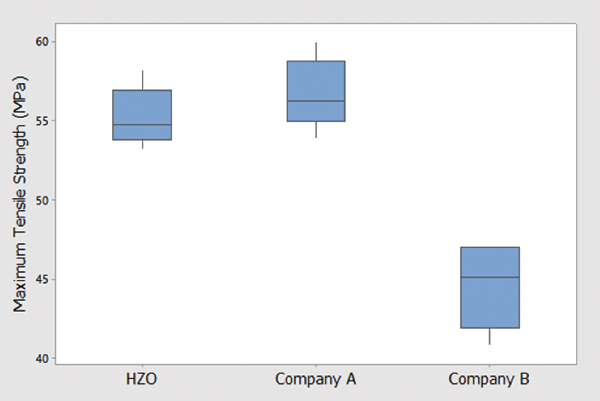 Figure 10. Maximum tensile strength of films from Company A, B and D. Data from University of Utah.

Hardness and reduced modulus. During a nanoindentation test, the nanoindentation probe is driven into a sample and then withdrawn by decreasing the applied force. The applied load and depth of penetration into the sample are continuously monitored. A load vs. displacement curve can be generated from the data, and from that data sample hardness [H] and reduced modulus [Er] can then be calculated.10 FIGURE 11 shows graphical examples of force-displacement curves generated with nanoindentation with the types of parameters that can be obtained with the data.

Figure 11. Examples of force-displacement curves generated with nanoindentation with the types of parameters that can be obtained with the data.12

Hardness is a measure of how resistant solid matter is to various kinds of permanent shape change when a compressive force is applied. The reduced modulus accounts for the elastic displacement in both the specimen and indenter.11

FIGURE 12 shows the reduced modulus and hardness of the samples at different contact depths. The Company C sample didn’t correspond with the other samples because of substrate effects, since the coating was thin, due to the sample being coated on the opposite side than intended. The other three samples:
Company A, B and D had similar results, indicating the mechanical properties were due more to the type of material than the coating provider. 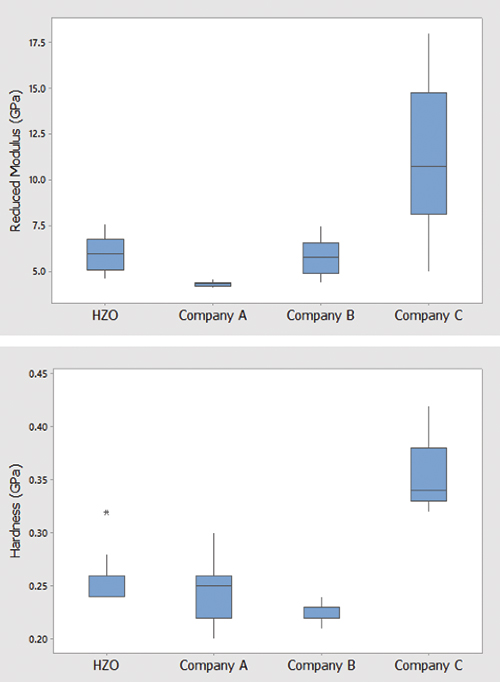 FIGURE 13 shows the average hardness, reduced modulus, and the contact depth of the samples obtained from the quasi-static indentation tests. Again, the Company C sample deviates from the rest due to substrate effects from the sample being too thin. The error bars represent one standard deviation. Sample 1 appears to have higher reduced modulus and hardness, which is likely a result of the substrate effect. The samples are the same as in Figure 12. 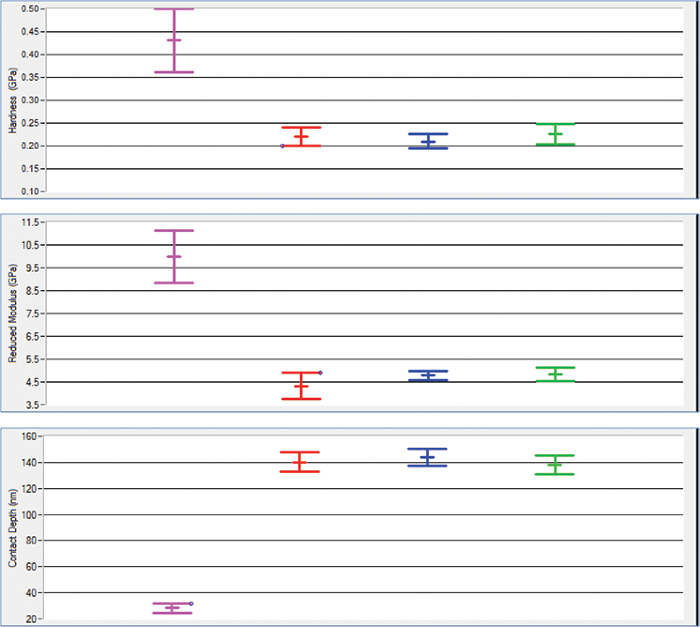 Figure 13. Average hardness, reduced modulus and the contact depth of the samples obtained from the quasi-static indentation tests. Data from Hysitron.

Process control. Some of the providers didn’t follow the proper instructions when depositing the coatings on the samples, which made comparisons difficult. The issues encountered included coating the wrong side of samples, coating at the wrong thickness, the use of adhesion promoters, and even when sample runs had to be repeated, a few of the issues still occurred.