Automotive and Apple were the two major growth factors in 2014.

The big story for the top electronics manufacturing services companies last year was consistency. Of the 10 largest companies only two changed places, and there were only two other minor swaps in the top 15. Curiously, the five largest EMS firms grew, the next five slipped, and all but one between nos. 11 to 20 grew.

Oh yes, and Foxconn remained No. 1.

Still, despite the lack of groundbreaking trends, there were many subplots, some of which are still being played out.

The worldwide EMS market grew an estimated 11% in 2014, to $490 billion. Just what constitutes “electronics manufacturing services” revenue is a moving target. It goes far beyond board level assembly to include bare board and even systems design, chip programming, test, repair, logistics, plastic injection molding, box build and in some cases marketing. This in part explains why the Circuits Assembly Top 50 differs in part from some other lists. The line, we feel, between ODM and
EMS is so narrow as to be permanently crossed, and as such the Taiwanese megaliths occupy many of the top spots in our rankings.

While one trend has been for EMS companies to try to capture more of the higher margin product design, winning that business is no sure thing. ODM profitability has been under siege. Those fighting for share of the diminishing PC space generally have slim margins – no. 8 Inventec’s was 1.5% – and companies like no. 9 TPV showed quarterly losses of as much as $50 million, suggesting that dominating the end-to-end space might not be the panacea it once was.

Not buying the trend toward total supply chain dominance? One area to watch is patents. This is a core strategy for Taiwan, whose companies filed for the most patents worldwide in 2014. Foxconn is the largest filer in Taiwan and the 18th largest in the US. Its total of 1,537 granted was tied with Ericsson and ahead of such stalwarts as Cisco, Toyota, Bosch and Xerox. The behemoth is pushing past its traditional 3C (computers, communications and consumer) markets and into medical and automotive. In June, for instance, it announced that it would work to develop a sub-$15,000 electric vehicle. Can the rest of the EMS industry, which has made a living the past few years on the seemingly endless demand for more and newer cars, keep up?

Not to be left out, no. 5 Flextronics filed for more than 300 patents last year, many in wearable technology, and was granted more than 100 worldwide OEMs, take note.

Two main drivers. In surveying this year’s Top 50, the majority of firms appear to be cresting on two major segments: automotive and handhelds. In particular, global smartphones grew rapidly, with shipments surging 28.4% to a historical high of 1.24 billion units, or 66.3% of the total global handset market.

Meanwhile, roughly 73 million motor vehicles were sold worldwide in 2014, up 6% from 2013. Given most vehicles have at least a dozen discrete electronics systems, that brings the total to over 900  million units, many of which are higher value than what is found in other volume sectors.

That’s not to diminish the non-tablet computing market, which continues to maintain extraordinarily high volumes: 308 million units last year, according to IDC. But revenues are falling and profitability is at a standstill. Sales slipped 0.8% to $201 billion in 2014, and are expected to fall another 6.9% in 2015, with smaller declines in subsequent years bringing the total to $175 billion by 2019, says IDC. Even tablets aren’t immune to the slump: a red fourth-quarter – the first time that’s happened since the market was launched in 2010 – slowed overall shipment growth to just 4.4%, totaling 229.6 million units.

The wild card is Apple. Currently, Foxconn, Pegatron (2), Quanta (3), Jabil (7), Inventec, BYD (15), Nippon Mektron (20) and Zhen Ding (23) are among the Top 50 that count Apple as a significant customer. The world’s largest electronics outsourcer can make or break you.

Hard currency. Many of the major ODMs are based in Taiwan and suffer when the local currency falls against the US dollar. That pales in contrast with US competitors. Flextronics, for instance, settles more than 90% of its revenue in US dollars. Thus, any strengthening of the dollar has a minimal effect on Flextronics’ reported revenue and profit.

In the 12 months immediately preceding when the exchange rates for this year’s Top 50 were set (TABLE 1), the dollar gained 29% against the euro, 17% versus the yen, 25% against the Hungarian forint, 7% versus the Singapore dollar, 11% compared with the Malaysian ringgit, 3% against the Taiwanese dollar, and 31% versus the Swedish krona. It was essentially flat with the Chinese yuan and Thai baht. There was a real effect: The dollar’s 35% gain against the Norwegian krone, for instance, in all likelihood knocked Kitron off the list. 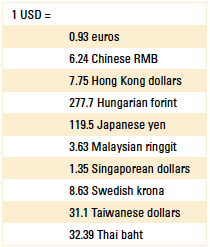 Acquiring minds. At least 50 acquisitions were completed in 2014, and probably many more involving private transactions among smaller players that never made it on the radar. Still, deals didn’t appreciably change the rankings (TABLE 2). No. 24 AsteelFlash and no. 42 Ducommon – usually reliable M&A players – stayed quiet. No. 48 KeyTronic’s purchase of Ayshire and no. 49 Neways’ buyout of BuS Group of the Netherlands were the largest EMS-related deals of those on the list. 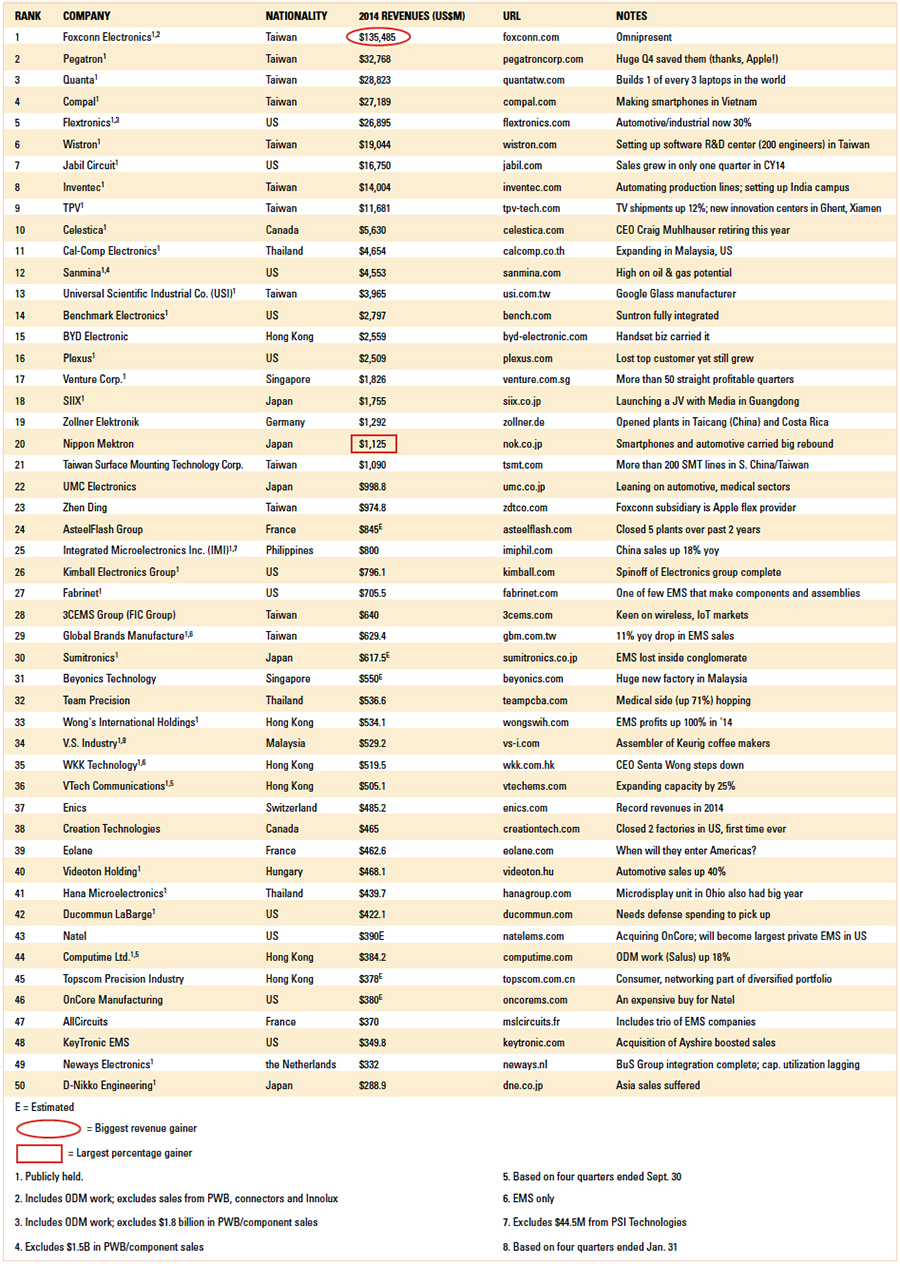 That could change. One analyst believes at least one mega-OEM will acquire an equally mega-EMS in the next couple years. If it happens, it wouldn’t be the first time the OEM sector was also a player in contract assembly. Go back to 1999, and you’d find Siemens forecasting more than half a billion dollars in EMS revenue, with plans to become a top five player in the market. Lexmark, Aim Global, IBM, Raytheon, Norelec, Radstone and Texas Instruments were among the many big name companies that also had contract assembly operations. And let’s not forget the genesis of the major Taiwanese ODMs was as in-house manufacturing arms of OEMs. It’s not a stretch to think that could happen again. Did you know that only nine of the current Top 50 were on the list 15 years ago?

Two other firms bear watching, if only for their stated intentions. No. 43 Natel merged with No. 46 OnCore in the first quarter of this year, and becomes the largest privately held EMS in North America. With a goal of $1 billion by 2019, it isn’t done. And look out for Sparton. Acquisitions are building the company, once one of the larger in the US, into a significant player once more. Lately, it has been on a tear. Its April 2015 purchase of Hunter Technology will likely boost it into the Top 50 ranks next year.

Winners and losers. The biggest loser was, of course, Nam Tai, which dropped out of the Top 50 and the EMS business altogether, opting to become a real estate venture. It had revenues of $856 million in 2013, all in China. Someone was going to benefit.

BYD, V.S. Industry, Cal-Comp and Compal were all up 20% year-over-year or more organically. But the big gainer was flex circuit manufacturer/assembler Nippon Mektron, which was up 30% from 2013. Likewise, no. 23 Zhen Ding (a Foxconn subsidiary) was up 18%. Flex is no longer a niche business.

India, the second largest country in the world by population, has yet to place a company in the Circuits Assembly Top 50. The closest candidate is Dixon Technologies, which is nearing $200 million a year supplying to LG, Philips, Panasonic and other big names. India’s indigenous EMS market is forecast to reach $1 billion this year, and with Jabil gobbling up the largest share (30%), it may be a while before any of the locals make it. Of course, not long ago the same could be said for China. And as late as 1999, Oriental Semiconductor, then Taiwan’s second-largest contract assembly, had annual EMS revenue of $150 million.

There were 15 nations in all represented in this year’s rankings, down two from last year. Taiwan and the US were, not surprisingly, the big winners (TABLE 3). Japan is shedding its image as a vertical culture, with five entries. For the first time, no Nordic countries charted. 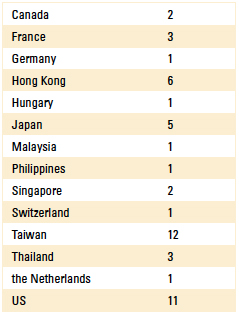 Compiling a list like this is tricky and there are some reasonable differences in terms of what should or should not be included. We choose not to include Shenzhen Kaifa Technology (KT) of China, which also sells components and is a subsidiary of Great Wall Computer. Our rationale is that the necessary transparency into KT’s actual revenues is missing. Japan’s Kaga Electronics has huge revenues as well, but most are from its component distribution business; the firm had about $250 million in EMS sales in 2014. We do, however, include the major flex circuit makers, since they provide considerable assembly services as well. Some other minor variances can be chalked up to the currency conversion factors. The exchange rates here were those on April 21.

As always, any errors are those of the author.